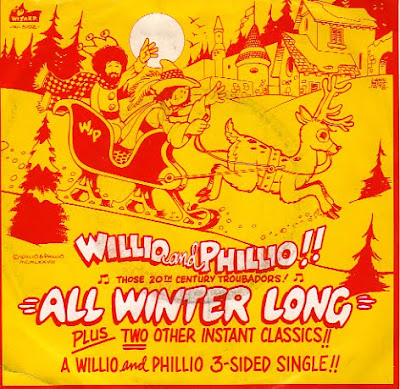 Toward the end of 1978, when Scott McConnell was the morning disk jockey at WXRT in Chicago, he started playing a 45 record called “All Winter Long” by the comedy/rock duo, Willio and Phillio, AKA Will Ryan and Phil Baron. From its opening Ringo Starr styled countdown of “4, 3, 2, 1!” it was an entertaining sleigh ride back to the “Daytripper” era of The Beatles. The song, penned by Ryan, uses a catchy arrangement to point out that people have three seasons to play outside, so winter is the time for snuggling indoors. “I see the springtime in your eyes,” the duo sings in perfect harmony, “and that’s the time I realize I wanna hold you.”

I recently listened to the two songs on the B-side for the first time in ages, and they’re actually pretty good. “Hail To Thee O Christmas Tree” mocks the tradition of cutting down live trees to help celebrate the holiday, using minstrel style vocals that evoke Brave Sir Robin’s entourage in Monty Python And The Holy Grail. I dedicate this ode to my fellow Famous In The Future comedy group member Frank Carr, who calls for a ban on sacrificing live trees every Christmas. “The Christmas Roundelay,” a silly tune done up with an old-fashioned choir, helps make this 45 sound like one of those special records The Beatles used to send out to their fan club members at Christmas time.

According to Wikipedia, Ryan and Baron later moved on to providing the voices for The Adventures Of Teddy Ruxpin television series. Ryan remains an active and highly successful voice over actor to this day.