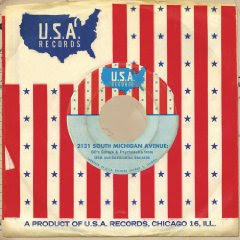 Following up on my post last Friday suggesting that Ellen Degeneres join forces with Little Steven Van Zandt to promote power pop and garage rock music, I have started a Fans Of Power Pop And Garage Rock Music Who Watch Ellen group on The Ellen Degeneres Show Community page. Please feel free to join. I also sent e-mails to Ellen and Little Steven, explaining my plan.

In the meantime, here’s a review I wrote for the Illinois Entertainer a few months back, on the 2131 South Michigan Avenue 2-CD set. It’s being shown here with the magazine’s permission.

2131 South Michigan Avenue - 60’s Garage & Psychedelia from U.S.A. and Destination Records is a two CD set that serves as a sort of Windy City version of Nuggets in the way it digs up long-lost treasures. It harks back to the days when WLS fueled a thriving local music scene by playing bands who were signed to Chicago-based indie labels. U.S.A. Records, which initially concentrated on R&B, eventually signed so many garage rock acts, it needed to create a second label, Destination to handle the load.

Comprised of 40 tracks (from 22 bands) recorded on those two labels between 1966 and 1968, 2131 South Michigan Avenue proves how much Midwestern musicians were in tune with international pop music. The Foggy Notions, The Boyz, and The Ricochettes were obviously inspired by the British Invasion. The CD offers a demo of The Cryan’ Shames performing The Beatles’ “You’re Gonna Lose That Girl” and Trafalgar Square romping through The Kinks’ “Til The End Of The Day.” The Messengers’ hit “Midnight Hour” is included here as well as its B-side, a cover of The Hollies’ “Hard Hard Year.” The Daughters of Eve, the only all female act included on the set, flip the gender on an Animals song for “Help Me Boy.”

Oscar Hamod & The Majestics create an infectious R&B groove for “Soul Finger” and Gary and The Knight Lites (later to become The American Breed) sound like a Motown act on “I Don’t Need Your Help.” The chiming guitars on The Sheffields’ “Do You Still Love Me” evoke The Byrds, while Lord and the Flies and The Cherry Slush experiment with more psychedelic sounds. Several tracks, like “Come With Me” by The Boyz, “Time To Dream” by The Lost Agency, and “I’ll Make You Pay” by The Shady Daze, exhibit the unbridled energy of classic garage rock that acts like The Chesterfield Kings and The Urges still champion today.

2131 South Michigan Avenue is also an archive of Chicago bands who went on to longer lasting, national success. There’s a track by The Cryan Shames called “Ben Franklin’s Almanac,” while The Buckinghams’ cover of the blues classic “I’m A Man” is considerably rougher than their Top 40 hits. The Flock, who would record more progressive albums on the Columbia label, are represented with the pop-oriented “Are You The Kind.” Amazingly, not a single track on this compilation is a clunker. That’s either a testament to Chicago area bands of the mid-1960s or the folks who put *2131 South Michigan Avenue* together. Or both.