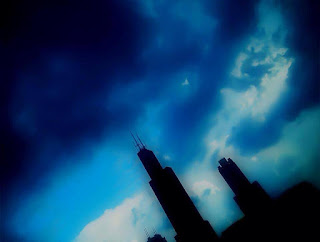 Tomorrow The Moon’s 2015 full-length debut was a 14-song adventure that followed the trajectory of two earlier and impressive EPs. The Chicago-based band had pursued a sci-fi identity from the start and Blow, Mind, Blow continued in that vein. It also offered other approaches and served as a starring role for vocalist-guitarist Steve Gerlach, a veteran of the Sons Of The Silent Age David Bowie tribute band and The Bad Examples.

“The Dying Game,” with its intriguing intro and ominous beat, was a prime example of how Tomorrow The Moon transplants listeners to other dimensions. “The Gun That Changed Everything” and “Strange Distance” had a similar atmospheric effect. “Just Wednesday Night,” on the other hand, was more eccentric and theatrical, while “Xpandora” would have been right at home in the 1980s techno scene.

Blow, Mind Blow was at its best on high energy tracks like “One Way Down” and “Everything They Said,” where Gerlach cut loose on guitar. The imaginative and careening “Miles Of Jenny” could have been a psychedelic hit single in the late 1960s. “Goodbye” was a less manic song that made the most of Tomorrow The Moon’s Brit-rock influences. Backed by a melodic arrangement, Gerlach proclaimed, “It’s high time we took to the sky. Goodbye.”
Posted by Terry Flamm at 9:08 PM