The (Local) Concert For George 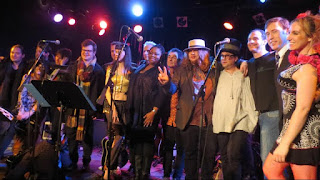 Director David Leland’s 2003 documentary Concert for George played on a large screen in front of the stage as people entered Martyrs’ for the George Harrison Birthday Tribute Concert this past Saturday night. Showing the film not only gave the audience something to look at while Ellis Clark and other Chicago area musicians worked to get the concert underway, it set the mood for what was to come. Like the superstar event that took place at London’s Royal Albert Hall in 2002, the George Harrison Birthday Tribute Concert in Chicago was a celebration of Harrison’s music as well as his decidedly cool and benevolent outlook on life.

Clark and his band The Big Parade, with special guest Ary Paloma Jeebie from the Amazing Heeby Jeebies, kicked things off with a set that included “Taxman,” “Old Brown Shoe,” and “Cry For A Shadow.” Sporting an Abraham Lincoln (or Ebenezer Scrooge) top hat, Clark and the elegantly dressed Ary Paloma Jeebie served as congenial and efficient hosts throughout the evening. They not only introduced each act, they often joined in the performances.

It became clear that all of these musicians were true Harrison fans; from The Twisted Roots playing “Badge,” which Harrison co-wrote with Eric Clapton for Cream’s Goodbye album, to Gunnar Cleemann offering a song from the Wonderwall soundtrack. Cleemann also covered “Beware Of Darkness” with help from Clark, and drew a burst of applause with the line, “Beware of greedy leaders, they’ll take you where you should not go.” Aethereal captured the eeriness of “Blue Jay Way,” as well as the silliness of “Savoy Truffle.”

Musicians drifted off and on the stage, but I believe it was a few members of Social Act that made the scathing “Piggies” even more fun by tossing in some Monty Pythonesque vocals. Phil Angotti joined Clark and Ary Paloma Jeebie on “Think For Yourself,” and there was a packed stage (including Mars Williams from The Psychedelic Furs) for a rollicking version of “Wah Wah.” The Handcuffs were in the midst of a set that included “Got My Mind Set On You,” “For You Blue” and “Bangladesh” when unfortunately, I had to leave to catch a train back home. At that point, there were still several acts that had yet to perform. Like George Harrison’s legacy, the George Harrison Birthday Tribute Concert seemed like it could go forever.
Posted by Terry Flamm at 10:29 PM

Wow, Thanks for your kind words. It was truly a magical night and it felt like George was with us.

Thanks, Michael. You guys did a great job putting the event together.