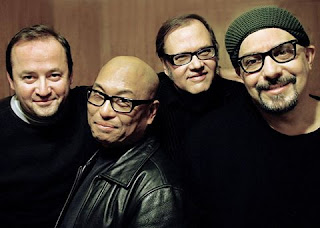 New Jersey boys The Smithereens are frequent and always welcome visitors to the Chicago area, and they’ll be at The Schaumburg Prairie Center for the Arts  tomorrow night. When I saw them at City Winery Chicago last September (see September 26, 2016 in the BHT archive for my review), they were celebrating the 30th Anniversary of their full-length debut Especially For You. It’s a landmark album, but every Smithereens record has its share of power pop gems. Look for them to do some covers of The Beatles and The Who as well.

The Adrian Belew Power Trio will be at Old Town School Of Folk Music tomorrow night.

Richard Thompson has two shows at The Old Town School of Folk Music next Sunday; an all request show at 4:00 p.m. and his regular show at 8:00 p.m.

If you saw Greg Kot’s Turn It Up column on The Regrettes in the On The Town section of today’s Chicago Tribune and wondered if such a young and relatively unknown band is worth that much attention, the answer is yes. Lead vocalist-guitarist Lydia Night’s observations on navigating life as a teenager ring true and are often bitterly funny. Plus, she and her mates mix authentic punk with the 1960s girl group sound and come up with irresistible melodies on their full-length debut Feel Your Feelings Fool! The Regrettes will be at Schubas this Sunday, with Brooklyn-based indie rock band Active Bird Community as their opening act.

Nancy Wilson from Heart will be on hand when The Rock And Roll Fantasy Camp celebrates its 21st Anniversary in Hollywood, CA. on July 29 – July 2. Other guests include Steven Adler from Guns N’ Roses, Greg Bissonette from the David Lee Roth Band, Ashley Dzerigian from Filter, and Joe Vitale.

Ann Wilson from Heart has a solo concert coming up at House Of Blues in Chicago on June 16. Tickets went on sale earlier today.

Tickets also went on sale today for the Phoenix and Lemon Twigs concert at the Aragon Ballroom on June 5.

Tellin’ Tales Theatre kicks off its latest production, Metamorphosis tonight at the Prop Theatre on Chicago’s north side. James Sweeney from Live Lit will be joining in, along with members Tekki Lomnicki, Steve Glickman, and Judi Lee Goshen. Metamorphosis runs this weekend and next weekend.

Power pop fans know him as a founding member of the band Green, and now singer-guitarist Jeff Lescher has a solo effort coming out. A post on Lescher’s Solo Album Facebook page states he has 28 songs that need a home. Hopefully, we’ll be hearing those songs in the near future.

The Griffin Theatre’s In To America, a new production that features stories of immigrants coming to America throughout the country’s history, continues at The Den Theatre through April 23.

Dave Davies from The Kinks will be coming to The Arcada in St. Charles next Saturday, April 8. I saw Mr. Davies with his first-rate backing band at Taste Of Lincoln Avenue a few years back and it was an amazing show that included his solo stuff as well as Kinks material.

The annual CHIRP Record Fair And Other Delights takes place next Saturday at the Chicago Journeyman Plumbers Union Hall on Washington, just west of downtown. Admission is $7. By the way, this should have been part of my April, Rock She Will post the other day. It’s always a lot of fun and you can find records, CDs, videos, posters, and other music-related treasures.

John Sebastian, who was a founding member of The Lovin’ Spoonful before embarking on a successful solo career, will be at SPACE in Evanston next Sunday, on April 9.

The Second Disc website recently reported that the Brinsley Schwarz album All Over Now is being released on the U.K. label Mega Dodo four decades after it was recorded. The band lineup is Nick Lowe, Ian Gomm, Brinsley Schwarz, Bob Andrews, and Billy Rankin; the tracks include “Cruel To Be Kind.”

Also, according to The Second Disc, there’s a new Bee Gees tribute album coming out, titled To Love Somebody: The Songs Of The Bee Gees 1966 – 1970. Al Green, Nina Simone, Percy Sledge, Lulu, Sandie Shaw, and The Staple Singers are among the artists who’ll be participating. It’s available on Amazon.

We still play the blues in Chicago, and by 2019, we’ll finally have a downtown museum honoring the music and role the our city played in its development. Chicago Blues Experience already has a Facebook page, announcing “A world-class cultural attraction for the City of Chicago,” and has garnered press in Crain’s Chicago Business and the Chicago Tribune.
Posted by Terry Flamm at 10:45 PM