Past And Present Perfect 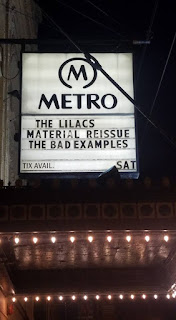 The Lilacs, Material Reissue, and The Bad Examples—the three acts in last Saturday’s immensely enjoyable triple bill at Metro—have their roots in the Chicago club scene of the early 1990s. Each has also gone on hiatus at some point. When The Lilacs hit the Metro stage this past weekend, it was the first time the band had performed in 25 years. It remains to be seen if The Lilacs will stick around, the way Material Reissue and The Bad Examples have been back with us for a while now.

Lead vocalist-guitarist Ken Kurson noted that playing Metro and sharing the bill with Material Reissue had a special significance for The Lilacs. The venue’s owner Joe Shanahan was an early supporter of the band, and the late Jim Ellison, vocalist for the original Material Issue, produced The Lilacs’ debut album, The Lilacs Rise Above The Filth. Even those unfamiliar with that record could easily embrace catchy songs like “Jennifer” and “Red Dress.” The bone-crunching and fun “It Seems Like Years Since I’ve Had Sex” was another highlight in a tightly performed reunion show that was given an enthusiastic hometown welcome.

Led by founding member/lead vocalist-guitarist Ralph Covert, The Bad Examples opened the evening with a flawless set that reached back to the band’s 1991 full-length debut Bad Is Beautiful (recently rereleased on vinyl) and up to the impressive 2011 comeback Smash Record. “Pictures Of A Masquerade” and “Kill Amanda” evoked Squeeze with strong melodies and Covert’s wry lyrics, while “Raspberry Jam” was a touching and catchy tribute to a late friend and band member. The Bad Examples closed with the rollicking “Not Dead Yet,” a local hit from Bad Is Beautiful that embodies the rebellious spirit of the Chicago music community.
Posted by Terry Flamm at 9:36 PM