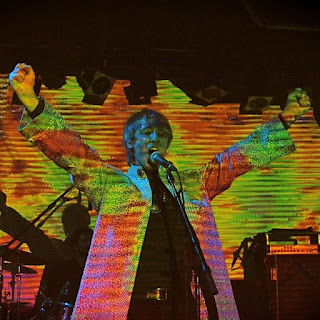 The Sons Of The Silent Age, a very good David Bowie tribute band that comprises veterans of Chicago’s music scene, will be at Martyrs’ on Lincoln Avenue tomorrow night.

Tickets went on sale today for Depeche Mode at the Hollywood Casino Amphitheater in Tinley Park on August 30, Tommy Keene at The Hideout onApril 27, and Jeff Tweedy at The Vic on April 21 and 22.

Lead-vocalist-bassist Tim Ferguson and his Chicago-based band The Red Plastic Buddha will host an ambitious psychedelic music festival on September 8 and 9 at the Live Wire club. Partnering with Lee Klawans, he’s already booked several acts, including The Luck of Eden Hall, Sisters of Your Sunshine Vapor, Friends of Dennis Wilson, and Warhorses from Detroit. Heaven’s Gateway Drugs from Ft. Wayne, Magic Castles from Minneapolis, The Orange Drop from Philadelphia, and White Shape from Rockford are also on the schedule, along with locals Constantine, Aethereal, Junkee Girl, Diagonal, and Lucille Furs. And he’s not done yet. There’s no name for this festival yet, so Ferguson and Klawans are asking for suggestions via Facebook.

“This is going to be the best psychedelic music fest Chicago has seen since 1968,” Ferguson told me in a Facebook message, and he knows his way around the genre. The Red Plastic Buddha has been at the forefront of Chicago’s psychedelic scene for a number of years now, and their Song For Mara album came in at number four on my Favorite Releases of 2014 list. The Red Plastic Buddha will perform an afternoon show at Red Line Tap on April 29 as part of International Pop Overthrow.

The Music Box Theatre on Chicago’s north side has a special multimedia event titled Deconstructing The Beatles; The White Album coming up next Thursday, March 16. Produced and hosted by composer Scott Freiman, the 90-minute documentary explores the various recording methods used by The Beatles on their iconic album.

The Bishop’s Daredevil Stunt Club has a new album called Don’t Buy This Record and they want people to take that title seriously. All songs are available for a free download on the Chicago power pop group’s Bandcamp page. I plan on reviewing it soon.

Mothboxer, the British band that’s earned a reputation for gorgeously crafted power pop, has returned from a two-year hiatus with new album titled The Secret Art Of Saying Nothing. I suspect I’ll have some good things to say when I review it in the near future.

There’s an International Woman’s Day art sale from 1:00 to 5:00 p.m. taking place tomorrow, March 11 at Bourdage Pearls on Ravenswood in Chicago. Local artist Brenda Goodbread Walker will be showing some of her work and there will be an acoustic performance by Graham Elvis. at 3:00 p.m.

The Tom Stoppard play Rosencrantz and Guildenstern Are Dead continues at the Metropolis Performing Arts Centre in Arlington Park through March 18, and the tribute show Fleetwood Mac Mania comes to that venue on March 24.

Roxy Swain, the Chicago-based band that’s fronted by the engaging vocalist-rhythm guitarist Roxy Swain, has a gig at FitzGerald’s in Berwyn next Thursday, March 16. Three of the group’s albums have been favorably reviewed here on Broken Hearted Toy.

The latest Wild Honey benefit for The Autism Think Tank will be held March 25 at the Alex Theatre in Glendale California, and as usual, it boasts an all-star lineup of musicians playing the music of an iconic band. The Beatles and Big Star have been honored in the past, and this time, Wild Honey will cast a spotlight on The Band’s Music From Big Pink album. Garth Hudson, an original member of The Band, will be joined by Jackson Browne, Peter Case, Victoria Williams, Syd Straw, David Baerwald, Continental Drifters, Plainsong, Cait O’Riordan and several others. The event will be hosted by Chris Morris.