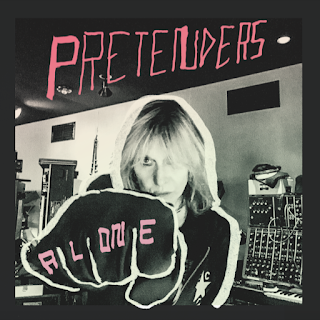 The title track on Alone could be Chrissie Hynde’s response to anyone who questions why this qualifies as a Pretenders album rather than her second solo effort. The answer being because she says so. “Nobody tells me I can’t/Nobody tells me I shan’t,” Hynde boasts to a swaggering classic rock arrangement. Working with Dan Auerbach of The Black Keys and The Arcs (he also produced) throughout Alone, Hynde retains her status as one of rock’s premier vocalists, even if some of the material is a little soft at times.

“Alone” features Hynde successfully experimenting with a talky, almost spoken word approach; making it not only defiant but also hip and funny. She’s not as powerful on “I Hate Myself,” which at first listen—even after a few listens—feels like the most annoying thing she’s ever done. But Hynde works some soul-searching ideas between the choruses and it turns out to be an intriguing piece. The songwriting on Alone, mostly done by Hynde and occasionally with Auerbach and others, always either packs a punch or displays a deep understanding of human emotions.

On “Chord Lord,” she portrays a would-be groupie aced out by the competition. “Thought I’d nothing to prove,” Hynde laments. “Then the bouncer made me move/And that little piece of fluff/Moved in and ran with the groove.” The bluesy “Roadie Man” describes the wife of roadie as she waits for her husband to return from his frequent tours, fully knowing he hasn’t been faithful. “Whatever happens, happens—has to be/But don’t rely on domesticity.” The hard-edged “Gotta Wait” is less introspective but it’s the closest thing to vintage Pretenders on Alone, and thus a lot of fun.

The second half of the album is almost exclusively slow stuff, but as always, Hynde’s vocals are gorgeous, and the writing is imaginative. Particularly on the meditative “Blue Eyed Sky,” which seems to be about a mystical lover. It’s impossible not to wish for more rocking songs, but as Hynde asks in her taunting voice on the title track, “What are you gonna do about it? Hmmm?”
Posted by Terry Flamm at 7:16 PM