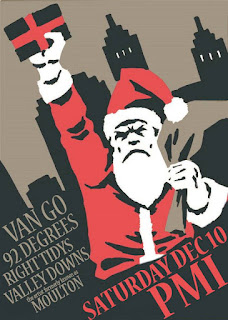 Power pop bands Van Go, 92 Degrees, Right Tidys, Valley Downs and The Artist Formerly Known as Moulton will be performing at the Jangle Ball Rock event tonight at Phyllis’ Musical Inn on Division. Most of these acts are veterans of International Pop Overthrow - Chicago.

For those who haven’t made their New Year’s Eve plans yet, here are some suggestions: Over The Rhine at The Old Town School Of Folk Music; Patti Smith and her band at Park West; EXPO ’76 with guest Kelly Hogan at FitzGerald’s; and Nice Motor, Lucky Boys Confusion, and Mark Rose from Spitalfield at the Double Door.

Graham Nash has created an official video for “Mississippi Burning,” one of the bonus tracks on his This Path Tonight solo album. Disturbing (and unfortunately real) images match the stark arrangement as Nash takes on the role of a murdered civil rights worker speaking from an unmarked grave. “Lynch the truth, it will not die,” he sings. “It just comes back to haunt us.”

The Goodman Theatre is offering its 39th annual production of A Christmas Carol, and according to Chicago Tribune critic Kerry Reid, this year’s version is more female-oriented. The Henry Wishcamper-directed production swaps Scrooge’s nephew Fred or an niece named Frida. Reid also noted the positive influence of the miser’s one-time fiancee Belle and his ultra-supportive sister Fan.

Chicago Sun-Times dance/theater critic Hedy Weiss had a piece in yesterday’s Agenda section describing how the setting for The Joffrey Ballet’s 2016 production of The Nutcracker has been changed to the 1893 Chicago World’s Fair Columbian Exposition.

Happy Events: Congratulations to Jack Kivel of Prior Lake, MN on becoming the Mall Of America’s first black Santa Claus. As reported by Tracy Swartz in the Chicago Tribune, OK Go, who are about to receive a Smithsonian American Ingenuity Award for their “Upside Down And Inside Out” video, took time recently to jam with students of the Juarez Guitar Club at Benito Juarez Community Academy in the Pilsen neighborhood. The Red Eye newspaper reported that Lady Gaga dropped by the Ali Forney Center for homeless LGBT youth with these words of advice: “Do one kind act before the end of the year. The act itself, it’s free—and it’s priceless.”

Chicago’s long-running free paper The Reader is presenting the Made In Chicago Market this Sunday from 11:00 a.m. to 6:00 p.m. at Chicago Plumbers Hall on Washington, just west of downtown. Admission is free.

The last Randolph Street Market of 2016 is being held this weekend, and it’s bound to have loads of holiday-related crafts and merchandise for sale. O

Over 40 artists will be offering work for sale at The Chicago Art Girls Pop-Up Store this weekend at Bell Elementary at 3730 N. Oakley in Chicago.

If you missed The Handcuffs’ show at the Liar’s Club last night, you might not see them performing live for a while. According to a Facebook post from drummer Brad Elvis, the band will be concentrating up their next album. It will be their fifth, and probably every bit as impressive as their first four efforts.

Bass player Annette Zilinskas joined her former mates The Bangles on “Mary Street” from the band’s self-titled 1982 EP at The Whiskey A Go-Go earlier this week. The Pandoras, including Kim Shattuck (The Muffs, The Breeders) were the other half of this impressive double bill. Legendary disk jockey Rodney Bingenheimer was also on hand.

If you’re one of the people who looked forward to the critically acclaimed PBS series Soundbreaking but still managed to miss it, there’s hope for you (us). It’s now available on DVD, with special bonus features.

Best wishes to musician Laura Good for her continued recovery from recent brain surgery. Laura is being looked after by her twin sister and fellow Twigs member Linda, and has been responding to well wishers on Facebook.

Rob Clarke and The Wooltones have matched vintage wintry footage with wistful sentiments on the video for their new holiday song “New Year New Day.”
Posted by Terry Flamm at 4:41 PM