A Few More Presents Under The Tree 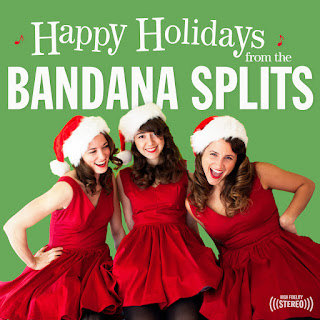 First, a reminder that Richard Milne’s 25th Anniversary Local Anesthetic Holiday Spectacular will be rebroadcast tonight on WXRT 8:00 p.m. The concept of inviting Chicago area musicians to send a brief song or comedy bit to hype their band, Milne’s show, and the holiday season has yielded many entertaining and frequently hilarious results over the years.

Having thoroughly enjoyed the imaginative and quirky indie rock songs Dawn Landes created on her Fireproof album, I was intrigued by the idea of her recording Christmas songs as part of trio called The Bandana Splits. The 10 tracks on their Happy Holidays album bring a harmonic Andrews Sisters approach to yuletide favorites like “Sleigh Ride,” “Jingle Bell Rock,” and “Winter Wonderland.”

Australian multi-instrumentalist Joe Algeri performs as The JAC in addition to his work with The Britannicas, The Jangle Band, and The Outryders, and gives the world a new Christmas song each year. 2017’s “Christmas Without Maria” features Algeri on lead vocals and 12-string Rickenbacker, along with his wife Erika and daughter Lydia on backing vocals. There’s also a Christmas Crew comprising bassist Herb Eimerman, drummer Stefan Johansson, keyboards player Lars Brussell, guitarist Andy J. Prinkkila and guitarist Paul Colombini. This this catchy, 1960s-flavored look at heartbreak during the holiday is available as a free download on Algeri’s Bandcamp page.

Even though veteran musician/producer Anton Barbeau’s 2010 “Xmas Song” was inspired by a wintry trip to Nevada City, he filmed the video that same year on the snowy streets Cambridge in England. He reposted the clip earlier today on his Facebook page, and the fun, catchy song can also be viewed on YouTube.

Best wishes to everyone in this Christmas and Hanukkah season, and thank you for checking out Broken Hearted Toy!
Posted by Terry Flamm at 5:05 PM