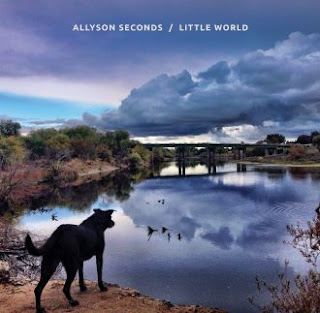 Little World finds Allyson Seconds once again working with the noted and quite distinctive psychedelic musician/composer Anton Barbeau. He also wrote and produced the Sacramento, CA based singer’s 2009 debut Bag Of Kittens. Seconds seems to take to Barbeau’s compositions naturally, bringing his adventurous tales to life and portraying a variety of interesting characters. In addition to Barbeau, other well-known musicians playing on Little World include Colin Moulding of XTC; Kimberley Rew from The Soft Boys and Katrina And The Waves; Bevis Frond; and the late Scott Miller from Game Theory and The Loud Family.

Barbeau’s tendency to conjure eccentric sentiments shows up throughout the album, particularly on the engaging love song “Dust Beneath My Wings,” on which Seconds sings, “You took off my hat and told my head what it is lacking.” The irresistible power pop tune “Little World,” which features Moulding on harmony vocals, seems to be about a loved one rather than a particular place. The imagery is more cryptic on “Summer Of Gold,” “Great Blue Heron,” and “Ono Waltz,” where hypnotic, multi-layered arrangements create the atmosphere of a sacred ceremony. The sexy ballad “Eye Kinda” somehow surfaces amidst all this exotic fare, as Seconds sighs and giggles through a song about watching someone stepping out of the shower.
Posted by Terry Flamm at 10:00 PM