Friends And Frenemies: An Artist Compilation From Mystery Lawn Music 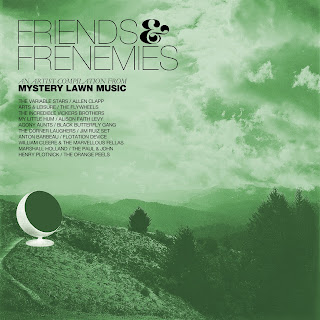 Friends and Frenemies is the first compilation from Mystery Lawn Music, an indie label that was founded by singer-songwriter Allen Clapp back in 2009 as a means for his band The Orange Peels to release its own albums. As Clapp recorded more and more fellow northern California acts over the years, he established an impressive client list. Friends and Frenemies, which came out late last month, brings several of them together for an 18-track mix of exclusive world premieres and previously released material.

Clapp shows up as a solo artist on the soulful “Friend Collector” and with The Orange Peels on the shimmering “Square Turns To Circle.” Agony Aunts deliver some eccentric and catchy pop with their mid-tempo “Leland Manor,” and The Variable Stars bring high energy and a vivid sense of imagination to the sci-fi love song “The Lights Above Los Gatos.” “Can’t Make It Without You” by the Jim Ruiz Set grooves to a bossa nova beat, while Alison Faith Levy taps into a 1970s hippie vibe reminiscent of The Fifth Dimension on “Rainbow Tunnel.”

There’s an entertaining variety throughout Friends and Frenemies; including Anton Barbeau’s acoustic guitar and synth number “Broken In Two,” Marshall Holland’s British Invasion inspired “Oh Please,” and The Incredible Vickers Brothers’ hard-edged power pop lament “Faded Away.” Fans of groups like The Sundays or Ivy would likely enjoy the breezy techno pop of “Can’t Breathe” by Arts And Leisure and “Take Care Of You” by Little Hum. The Corner Laughers’ spritely “Sophie In The Streets Of Stockholm” has an instant appeal with its galloping beat and cosmopolitan lyrics.

Friends and Frenemies is available on iTunes, Spotify, and Amazon, as well as in a limited CD release.
Posted by Terry Flamm at 10:37 PM