The Smithereens ESP3PECIALLY F0R YOU - Disc One 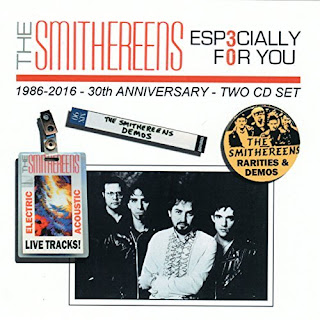 The Smithereens celebrate the 30th Anniversary of their full-length debut Especially For You a big way with this recently released two-CD set. Assorted live, acoustic, and demo versions the original 12 songs are presented over 47 tracks (along with two rarities), and each provides a unique perspective on how the New Jersey-based band creates its catch power pop music. In order to give enough space to this ambitious effort, I’m posting a review of each disc. Disc 2 will be reviewed in the near future.

Lead vocalist-guitarist Pat DiNizio’s 1979 demo of “I Don’t Want To Lose You” is lighter and more 1960s oriented than the version his band officially released seven years later. The sweet harmonies on the otherwise raw demo of “Time And Time Again” evoke The Beach Boys, and that influence is more noticeable on a fun rendition of “Behind The Wall Of Sleep” that’s all “la la la la la la” singing except for the chorus. There’s also a grungy instrumental take on “Strangers When We Meet.”

The live versions on Disc One were recorded at well-known clubs between 1986 and 1994. You can hear the crowd at The Bottom Line in New York clapping along as bassist-vocalist Mike Mesaros improvises a bit before launching into the ominous intro of “Blood And Roses.” The melancholy “Alone At Midnight,” recorded at that same show, has an impressive instrumental coda led by guitarist Jim Babjak. Other live highlights include “I Don’t Want To Lose You,” recorded at Chicago’s Cabaret Metro; “Behind The Wall Of Sleep” at the Los Angeles House Of Blues, and “In A Lonely Place,” recorded at The Roxy in L.A.
Posted by Terry Flamm at 10:48 PM