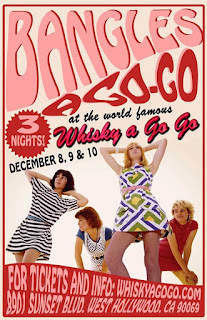 The Bangles will be involved in some impressive double bills during a three-night stand at The Whiskey A Go Go in Hollywood, CA. On December 8, they'll be joined by The Pandoras, on December 9, it's The Last, and on December 10, it's The Muffs.

A hearty welcome to everyone who's in town for the Chicago Marathon or the post-season match-up of the Chicago Cubs and San Francisco Giants at Wrigley Field.

The Second Disc website recently reported on the upcoming Parlophone Records release Legacy, a two-CD set featuring 40 David Bowie tracks. "Space Oddity,""The Jean Genie," "China Girl," "Ashes To Ashes," and "Young Americans" will be included, along with some of his most recent songs. The career-spanning collection will be available on November 11.

The Hideout, one of Chicago's better-known clubs, is holding its annual Flea Market this Sunday from 10 a.m. to 4:00 p.m. at 1354 W. Wabansia. The rock and roll-flavored event will include vinyl records, clothing, musical instruments, and accessories.

The Smithereens will perform The Betty Babjak Memorial Concert, an all-ages show to honor guitarist-vocalist Jim Babjak's late wife, on October 29 at The Hungarian-American Citizens Club in Woodbridge, NJ. Original bassist Mike Mesaros will be performing with the band for the first time in 11 years, and Jim Babjak will reunite with his side project Buzzed Meg. Proceeds will benefit the Babjak Family and The Betty Babjak Memorial Fund to establish a scholarship for Rutgers students who have lost a parent to pancreatic cancer.

There will be no cover charge tomorrow night when Chicago alt-rock band Whitewolfsonicprincess performs at Phyliss' Musical Inn on Division Street. Steve Gilpin and The Hens are also on the bill.

The new album Alone from The Pretenders will be available on October 21 via iTunes, in CD and LP formats, as well as a signed CD/LP with litho print combination.

Reap The Wild Wind on Lincoln Avenue. Former Ultravox frontman Midge Ure will be performing with his current band on Wednesday, October 11 at Martyrs'. The Mixture and DJ Scary Lady Sarah are also on the bill.

There's an opening reception next Thursday, October 12, at the Awakenings Gallery on Ravenswood for Graphic Relief, a new art exhibit that recruited cartoonists to condemn sexual harassment. Ten artists will be showing their work. There's an article by Aimee Levitt about Graphic Relief in the Arts and Culture section of this week's Reader.

Get your tickets before all of the good ones are taken. Ian Hunter and The Rant Band will be doing gigs at City Winery Chicago this coming Tuesday and Wednesday. Hunter's brand new album Fingers Crossed has been getting airplay on Little Steven's Underground Garage syndicated radio show.

The Cubs have just won their first game against the Giants as I'm finishing up this post.
Posted by Terry Flamm at 11:13 PM