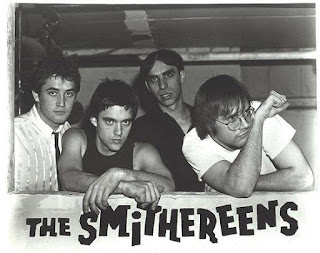 Halloween music can range from garage rock party songs to ethereal Celtic ballads; and from ominous to silly.

“Blood And Roses” brought national attention to The Smithereens in 1986 when it was one of several gems on the band’s debut effort Especially For You. The ominous bass playing from Mike Mesaros immediately establishes dramatic tension, and then vocalist Pat DiNizio depicts a relationship shattered by the inability to express or accept love. There’s nothing explicitly scary about DiNizio’s lyrics, but they create a sense melancholy and dread as they’re woven through the guitar-driven arrangement.

Those who’ve heard The Smithereens cover The Who’s “Behind Blue Eyes” in concert might have noticed an emotional connection between that song and “Blood And Roses.” It would be interesting to know if that was DiNizio’s goal. There are six different versions of “Blood And Roses” on ESP3CIALLY F0R YOU, the recently released two-CD 30th Anniversary edition of the band’s first album. There are a couple blistering live versions with extensive jamming; an acoustic performance, and some demos.

“Blood And Roses (Voodoo)” offers a different perspective. Though the arrangement packs its original punch, DiNizio and (I’m assuming) Mesaros, guitarist Jim Babjak, and drummer Dennis Diken add some goofy primitive grunting that eventually morphs into chants of “Voodoo!” Purists might balk at such nonsense, but a lot of Smithereens fanatics are likely to find this a fun alternative that also serves as Halloween music that somehow bridges the gap between ominous and silly.
Posted by Terry Flamm at 9:49 PM