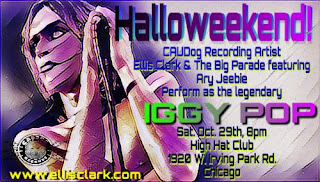 If you live in Chicago or Cleveland and started planning your Halloween party for October 28 or 29 several weeks back, you might be wondering now if you would have been better off choosing the 31st even though it’s a Monday. Neither of these cities has won a World Series title in several decades, so hundreds of long-suffering fans will want to follow the games on TV rather than bob for apples. The only consolation for party planners is that the series can’t end tonight or tomorrow night because each team needs three more wins to clinch.

The people in Woodbridge, NJ aren’t likely to be obsessed about the 2016 World Series, but they do have an entertaining event coming up tomorrow night that will also benefit a worthy cause. That’s when The Smithereens will perform The Betty Babjak Memorial Concert, an all-ages show to honor guitarist-vocalist Jim Babjak’s late wife at The Hungarian-American Citizens Club. Original bassist Mike Mesaros will be performing with the band for the first time in 11 years, and Jim Babjak will reunite with his side project Buzzed Meg. Proceeds will benefit the Babjak Family and The Betty Babjak Memorial Fund to establish a scholarship for Rutgers students who have lost a parent to pancreatic cancer.

The annual Halloweekend tribute band festival returns to The High-Hat Club on Irving Park tonight and tomorrow night. Eleven acts are scheduled to cover songs by famous rock and roll artists. Long-time Halloweekend participants Androgynous Mustache will be honoring Billy Squire tonight, and other bands will perform as The Eagles, The Motels, The Mamas And The Papas, and The Psychedelic Furs. Ellis Clark and The Big Parade, with special guest Ary Jeebie, headline Halloweekend tomorrow night, with a set of Iggy Pop songs. The Webstirs will serve up Three Dog Night, and other local bands will be play Fleetwood Mac, The Lemonheads, Bow Wow Wow, and Gang Of Four.

According to Peter Margasak's article in this week’s Reader, Elvis Costello and The Imposters will concentrate on Costello’s groundbreaking 1982 album Imperial Bedroom when they perform at the Chicago Theatre tomorrow night.

The Beatles - Eight Days A Week - The Touring Years, Ron Howard’s Beatles documentary will be shown at the Gene Siskel Film Center downtown twice on Friday, November 4, and then once each day until Thursday, November 10. The film will be paired with 30-minute documentary The Beatles Live At Shea Stadium.

Foundation Of Music’s 28th Annual Rock For Kids Auction takes place next Friday at Park West in Chicago. WXRT morning drive air personality Lin Brehmer will once again serve as emcee, and former XRT Program Director Norm Winer will receive the Foundation Of Music’s Crystal Brick In The Wall award from MTV VJ Alan Hunter. Attendees will also have an opportunity to bid on rare items donated by musicians, sports figures, and other celebrities.

The Blue Whiskey Independent Film Festival will be holding a fundraiser next Saturday at Smith Street Station (next to Durty Nellie’s) in Palatine next Saturday. Admission is $20.

New City, the bi-weekly Chicago free publication has switched to a smaller though more glossy format for its annual Best Of Chicago Issue. There’s a new arts-oriented free publication called The Seen - Chicago’s International Journal Of Contemporary & Modern Art. Nice to see Stephanie Cristello, formerly with the online Chicago Art Machine publishing empire, serving as The Seen’s editor. I still have fond memories of working with Kathryn Born, Robin Dluzen, and Cristello at Chicago Art Machine a few year back. Since it folded, all three writers have remained active on the local arts scene.

The list of this year’s releases for its Black Friday event is now available on the official Record Store Day site. The one-day event will see limited-edition vinyl rarities from The Kinks, The Bangles, The Beach Boys, Jethro Tull, The Cars, Iggy And The Stooges, The Monkees, The Raconteurs, The Ramones, The Rolling Stones, The Paul Butterfield Blues Band, The Turtles, The Fleshtones, The Yardbirds, Big Star, and Billy Idol. I’m hoping to post more on Black Friday Record Store Day as the event gets closer.

The deadline for filmmakers to submit their work to the 24th Annual Chicago Underground Film Festival is December 1, 2016. The fest will run from May 31 to June 4 in 2017.

Tickets went on sale today for the David Bowie tribute band Sons Of The Silent Age’s January 15 gig at Metro. It will be part of the Tomorrow Never Knows Festival.

The Zombies will celebrate the 50th Anniversary of their Odessey And Oracle album with a tour in 2017. They’ll be at Thalia Hall in Chicago’s Pilsen neighborhood on April 13. Hopefully, this iconic British Invasion band will have been inducted into The Rock And Roll Hall Of Fame by then.

Congratulations to Kym Brunner, co-leader (with Cherie Colyer) of the writers group I’ve belonged to for several years, on the release of her latest Young Adult novel. Flip The Bird comes out on November 1.
Posted by Terry Flamm at 10:13 PM