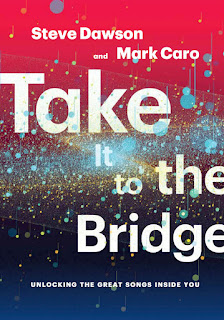 Musician Steve Dawson, who has garnered critical acclaim as a member of the alt rock/country band Dolly Varden as well as for his solo career, will join writer Mark Caro in presenting Songs, Stories & Creative Sparks at SPACE in Evanston this Saturday afternoon. The 1:00 p.m. event will feature them discussing and reading from the new book they've written together, Take It To The Bridge: Unlocking The Great Songs Inside You.

Dawson also teaches songwriting at the Old Town School of Folk Music. I interviewed him, along his wife—artist and Dolly Varden vocalist-songwriter Diane Christiansen—several years ago for the Illinois Entertainer. They came across as thoroughly engaging and funny as they discussed their music. I met with Dawson again in 2013 for an IE feature about Dolly Varden's For A While album. My article noted, "As a songwriter, Dawson draws inspiration from various sources, including the early 1970’s music of Neil Young, Gram Parsons, and Linda Ronstadt, as well as The Beatles. He agreed with the image of him being like an artist working from a palette"

Mark Caro covered media and entertainment at the Chicago Tribune for a number of years and has recently appeared in Chicago Sun-Times. He hosted a film screening and discussion series called Is It Still Funny? at the Music Box that aimed to determine how well classic comedies like Blazing Saddles, Duck Soup, Animal House, and Something About Mary have held up over the years. It should be interesting to hear what Dawson and Caro have come up with in this new collaboration. Admission is $12.
Posted by Terry Flamm at 10:26 PM