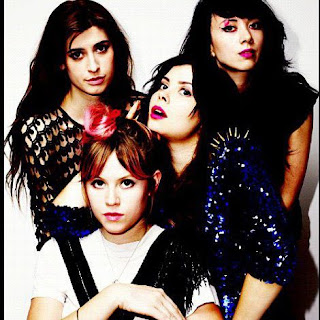 The faces of Feathers. Photo from Feathers Facebook page.

Last New Year’s Eve, when I picked Your Clothes Will Wear Themselves by Magatha Trysty as the fourth best CD of 2012, it wasn’t just a case of hometown boosterism. I really was blown away by the Chicago-based band’s energy, imagination, and the way husband and wife Christopher David and Catherine Louise weave their vocals together. In a recent email, David seemed pretty sure Magatha Trysty’s upcoming new release will be better than Clothes.

Magatha Trysty will be headlining a roster of five acts tomorrow night at Ultra Lounge on Milwaukee Avenue. Jack Rabbit, The Middle City Sound, rap/rock band Hero Monster Zero, and hip hop duo 8090, are also on the bill. Admission is $7, the music starts at 9:00 PM. Here’s the official video for “Saturday Dress” from Your Clothes Will Wear Themselves.

Jokes4Miles, the charitable organization created by comedian-writer Len Austrevich, continues to explore ways to aid young people afflicted with cancer, as a legacy to Austrevich’s son Miles, who passed away after a lengthy battle with the disease last December. Filming for a documentary and promotional video is taking place tomorrow and Sunday at the new Jokes4Miles headquarters, and several volunteers, including actors, dressers, grips, and assistants, are needed. Further information is available online.

Pleased To Meet Me. According to a Doctor Who Facebook post, David Tennant, who portrayed the 10th generation Doctor, will be joining forces with current generation Doctor, Matt Smith, for the sci-fi show’s 50th Anniversary Special. Actress Billie Piper, who played Rose Tyler, is also slated to appear. The post received 67, 475 ‘Likes.’

It will be a double bill of melodic rock and roll when The Smithereens open for Tom Petty And The Heartbreakers during a series of concerts across the USA this summer. Chicago isn’t on the tour, but The Smithereens will be performing at the Wells Street Art Fair on June 8th.

Feathers, a synth band that creates hypnotic songs featuring Anastasia Dimou on lead vocals, are touring in support of their debut release, If All Now Here. They recently played SXSW, and are coming to Lincoln Hall, along with UK singer-keyboards player Little Boots, on May 8th. A video for “Soft” by Feathers can be viewed on the Fader music site. Little Boots has a new release, Nocturnes, due in May.

All In All, You Can Have Your Own Brick At The Hall. If you’ve ever dreamed of seeing your name on display amidst some of the biggest stars in rock history. The Rock And Roll Hall Of Fame has a deal for you. For $350, you can have your name, as part of a 4-line message, etched into a brick destined to be installed in the plaza in front of the museum. Less expensive versions are available for $300 and $195. The brick will also feature the Hall’s logo.
Posted by Terry Flamm at 11:47 PM