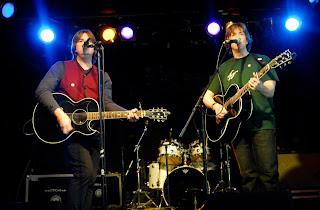 It’s another two-headed beast for International Pop Overthrow at the Red Line Tap tomorrow, Sunday, April 21st.  The afternoon and evening showcases will feature six bands each. The International Pop Overthrow website has the full schedule for the fest’s entire run in Chicago, with links to all the artists. Here’s the lineup for the earlier showcase tomorrow. Some of the names are unfamiliar, but they get more interesting once you start checking them out.

The Unswept, a duo consisting of cousins Charlie and Ryan O’Brien were one of the pleasant surprises at last year’s IPO-Chicago. They’re recent transplants from Sheffield, England to Chicago, and have a knack for catchy, 1960s-influenced pop. A recent video posted on Facebook shows the cousins backed by a full band, performing a Rutles song at The Hideout. Whether they’ll have a full band or play Rutles songs at The Red Line Tap tomorrow is anyone’s guess, but I still have a good feeling about this.

The shelf life may have expired for a name like The Artist Formally Known As Vince, but any band that claims “Glitter, pretty things, and late nights” as its interests sounds promising. Plus, they draw upon the likes of  Cheap Trick and T Rex, and have a full length, high-energy CD out called On Display.

Judging from the influences listed on its Facebook profile, the quartet Freetoed incorporates a bit of C&W into its indie rock approach. Freetoed has a CD out, with the first single being the catchy “My Red Baloon.”

The Logan Squares Band released a 14-song CD titled and That is That last summer, and it has some pretty cool sounding guitar-driven songs on it. Should be interesting to hear them in a live setting.

The Abbeys have performed at every single International Pop Overthrow since the festival has been coming to Chicago. Founding members singer-guitarists Mike Cohen and Jeff Janulis have spent years weaving Everly Brothers type harmonies together, so it’s no surprise they also have a band called The Everly Hillbillies. As for The Abbeys, they have a highly melodic power pop sound.

Wiplot is a Bloomington, IL quartet that aims to create alternative/power pop music with witty lyrics. Frontman and chief songwriter Dean Carlson previously performed with The Something Brothers. The band likes to describe itself as ‘delicious.’
Posted by Terry Flamm at 11:03 PM