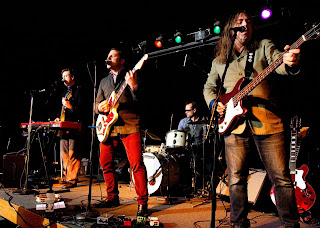 Sorry this preview is a bit brief, but it’s hard to get two of these done in a single night. For full information on the bands below, check out the International Pop Overthrow website.

Milwaukee-based quartet Trolley has three vocalists, and creates irresistible power pop tunes. Their Things That Shine And Glow was one of the best CDs of 2011. One of the tracks was picked as The Coolest Song Of The Week on Little Steven’s syndicated radio program, Underground Garage. I’m betting they’ll have some new tunes to unveil at tomorrow’s (April 21st) performance.

The trio Sketch Middle has been performing together since the late 1990s, and their debut release, Time Capsule, was produced by Jeff Murphy from Shoes back in the day. They’ve released a number of EPs since then, while drawing inspiration from Material Issue and Smoking Popes.

The Black Roses describe their sound as, “a little punk, a little pop, and some Rock n’ Roll.” They’re fronted by singer-guitarist Janelle Taylor, and have a brand new release to promote at tomorrow’s gig.

If you detect a Hole reference in the name Dana DeStefano And Dollparts, you’d be right. Singer-acoustic guitarist DeStefano and her three bandmates list Courtney Love’s former band as a major influence, along with Rilo Kiley, The Pixies, and The Beach Boys.

Critically-acclaimed band Semi-Twang have been performing country/alternative music since 1985. They’re led by singer-songwriter John Sieger, whose compositions have been covered by a number of well-known artists.
Posted by Terry Flamm at 11:56 PM