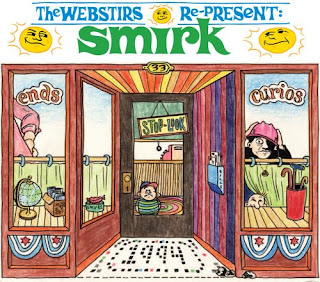 Food And Drug is a coed indie rock band that describes its music as drawing inspiration from The Velvet Underground, The Pixies, and The Kinks.

Singer-songwriter Rob Schultz tends towards a liberal point of view but never lets his politically charged lyrics overwhelm the catchy arrangements of his music. On his recent CD Tragedy And Comedy, his approach ranged from  humorous to hard-hitting .

Long-time IPO-Chicago participants The Webstirs are masters of the quirky pop song, and are also well-known for harmony vocals. A remastered edition of their earlier CD Smirk (with clever new packaging that mirrors The Beach Boys' Smile LP) offered power pop gems like “Old Enough” and “It’s Over Now.”

Rich Sparks and Doug Bobenhouse from the previously mentioned Food And Drug also play in Dad’s Magazine, which describes itself on Facebook as being “assembled from gently used parts salvaged from Swinger, Sun Sawed In Half, The Webstirs, and Dad Factory.” Sounds promising.

The Surf Zombies have just put the finishing touches on their fourth CD of “hot rod horror surf”          instrumentals. They’ve been around since 2006 and feel a kinship with The Safaris, Link Wray, and The Cramps.

Phil Angotti and Ellis Clark both have new CDs coming out, but for this collaboration, they're going to concentrate on covering legendary Chicago-based power pop bands like Cheap Trick, Shoes, and Off Broadway. Angotti, in particular, has become a gifted mimic of other artists through his frequent tribute shows (The Bee Gees, The Monkees, Paul McCartney, etc) around town, and Clark has been a member of Social Act, Epicycle, and The Handcuffs. Both of these gentlemen have worked IPO-Chicago consistently since the very beginning, and can always be counted on for an entertaining show. I suspect a lot of musicians will be in the audience for this gig.
Posted by Terry Flamm at 12:24 AM