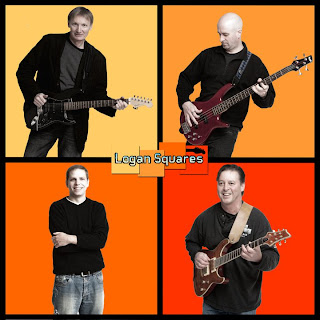 Congratulations to International Pop Overthrow CEO/Founder David Bash on another thoroughly enjoyable swing through Chicago these past few weeks. I was only able to attend two showcases this year, due to scheduling conflicts and the limits of public transportation. From what I saw, Bash still has the magic touch in finding local (and occasionally out-of-town) acts to fill his roster.

The afternoon showcase on Sunday, April 21st featured The Unswept  performing as a full band instead of as a duo, as they did last year. Cousins Charlie and Ryan O’Brien create eccentric, pop songs that are just as likely to tap into the British Invasion as Elvis Costello, and the new band members filled out the sound quite nicely. The Artist Formally Known As Vince, which was also back at IPO - Chicago for its second year, played original high-energy glam rock spiked by lead vocalist-guitarist TAFKAVince and vocalist Lauren. At times, their spirited duets recalled The Rocky Horror Picture Show.

The next act, Freetoed, was missing its drummer, but still created a full-bodied sound via acoustic and electric guitars, and mandolin. The indie rock band also benefited from a few guest musicians who joined them onstage. The Logan Squares are one of Bash’s recent discoveries, and they delivered with a guitar-driven set that recalled R.E.M. The band filled its music with spirited instrumental breaks, but never came across as a self-indulgent jam band.

The Abbeys  have performed at every IPO - Chicago, and their set on the 21st showed just how strong singer-guitarists Mike Cohen and Jeff Janulis have become as the band’s nucleus. Lively covers of The Everly Brothers and The Webstirs were mixed with catchy originals. Unfortunately, I was unable to stay for the final band that afternoon, Wiplot.

The energy level was still high almost a week later as IPO - Chicago closed with a seven-band showcase of Saturday, April 27th. The Redfords took a massive though melodic approach using shimmering guitars and a powerful vocalist, on originals tunes as well as a cover of The Cure’s “I Will Always Love You.” Like Freetoed, The Redfords are a prime example of how Bash has woven other rock sub-genres into his original power pop approach. The trio 92 Degrees, like The Abbeys, are longtime IPO - Chicago favorites. In addition to performing power pop songs from their vinyl Ep and self-titled CD, 92 Degrees surprised the crowd with some Rolling Stone covers.

A Fragile Tomorrow were one of the few out-of-state bands at this year’s IPO - Chicago; having come from Charleston, South Carolina. With an impressive resume that includes opening for The Bangles on tour, and having its new CD, Be Nice Be Careful, produced by Mitch Easter, A Fragile Tomorrow had raised expectations for those of us who research IPO bands prior to attending a showcase. And they came through with a set filled with harmony vocals, ringing guitars, and irresistible melodies.

The Queue was making its fourth IPO - Chicago appearance, but its lead vocalist-guitarist was the only surviving member among a new crew of musicians. I haven’t seen the band in a few years, but The Queue sounded more hard rock and funkier than I remembered. The material still kept an emphasis on melody.

I would have loved to have stayed for The Romeros and The Van Buren Boys, but had to leave early to make my way back home.

International Pop Overthrow has already moved on to New York, where it will settle in for six days. Then it’s off to England for showcases in Liverpool and London. If you’re a power pop or indie rock fan eager to discover new groups, one sure way to do that is to check out the IPO schedules and follow the links to the various artists. I guarantee it will be worth the effort.
Posted by Terry Flamm at 11:17 PM