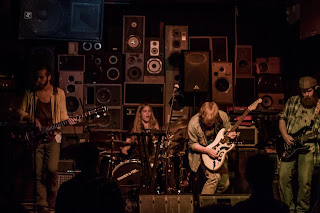 Guess The Genre. Photo from The Gold Web Facebook page.

Last year, while I was enjoying an International Pop Overthrow showcase at The Red Line Tap, a gentleman sitting nearby asked me in a charming English accent, “Is this a competition?” I explained that pretty much everyone was a winner at IPO, but there were no prizes involved. If you watch reality TV shows like American Idol and The Voice, you rarely encounter any power pop artists. There’ll be some at The Red Line Tap tomorrow night, along with a few hard rock bands, as this traveling music festival continues its Chicago visit. For the full schedule, with links to all the artists, check out the IPO website. NOTE: There are six sets scheduled for Wednesday night, but one of then is now a TBA.

Mike Vanderbilt will be wearing a few different hats at this year’s International Pop Overthrow-Chicago. He was wearing a sort of Frank Sinatra fedora while checking out The Abbeys at IPO this past Sunday. In addition to that, Vanderbilt has a solo gig Wednesday night, and will join The Romeros when they make a rare (and final?) appearance Saturday night. His show tomorrow is billed as Mike Vanderbilt And The Suburban Garage Sound, but he’ll be making all the sounds himself. Vanderbilt draws inspiration from The Replacements, The Old 97s, and Cheap Trick.

The Facebook profile for Night Of Fire describes their music as “the definitive hard rock sound.” There’s also a mention of “punchy, articulate melodies,” and since IPO Founder/CEO David Bash told me via email for an Illinois Entertainer article that he doesn’t book any artists that don’t have a strong sense of melody, it’s a safe bet that Night Of Fire’s songs are powerful and catchy.

I have to admit, Placeholder is one of the least intriguing band names I’ve ever come across, but again, I’m trusting Mr. Bash’s track record for picking worthy bands for his showcases. Led by vocalist-guitarist Myque Peters, the trio got its start in Boston and made a pit stop in Tempe, AZ before arriving in Chicago. According to their Facebook bio, Placeholder’s set is “Loaded with songs about girls, swearing, and dressing well.”

If you’ve ever wanted to check out some Suburban Longboard Rock, come to The Red Line Tap tomorrow night for a set by Minor Wits. In addition to listing the above genre on its Facebook profile, the trio also promises Wind-Surf Pop and Power Pop. Minor Wits is currently recording new material.