EP Review: Static In Verona - Some Things You Knew 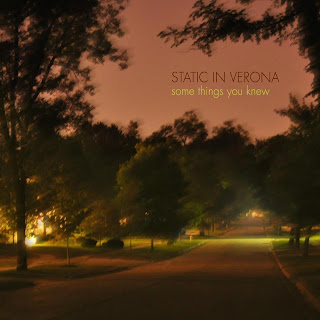 First, a brief note: Johnny Marr's recently released The Messenger is one of the best CDs of 2013 so far and it's NOT GETTING ENOUGH AIRPLAY! He has a WXRT-sponsored gig tonight at The Metro.

The music Rob Merz creates under the name Static In Verona might best be described as shoegaze, but he pumps too much energy and variety into the five songs on Some Things You Knew for it to fit snugly into that category. Merz released his debut, Be Quiet As You Leave, in 2009 and reportedly, discovered shoegaze afterwards. Whatever the case, he’s so adept at crafting sonic landscapes with layered vocals and atmosphere, it’s virtually impossible to believe this is the work of one musician.

Static In Verona makes a grand entrance on Some Things You Knew with the lush keyboards and ethereal singing of “White Knuckles.” “Loud Night/Quiet Morning” starts with that same approach and then glides through several tempo shifts before settling in for an almost classical coda. The guitar-driven “Friendly Fires” and “Look Like Gold” fall more into the techno pop mode, and are reminiscent of The Delays and Ivy. “Everything You Knew” has a hard stomp and spare arrangement that sets it apart from the other tracks, but Static In Verona succeeds with that approach as well.
Posted by Terry Flamm at 4:32 PM