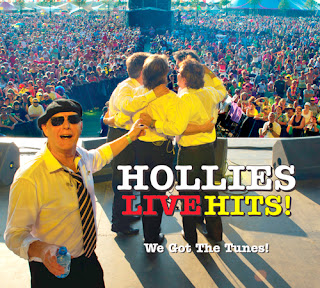 The Hollies have been around for 50 consecutive years, although drummer Bobby Elliott and lead guitarist-harmony vocalist Tony Hicks are the only original members left in the band. The current lineup has been together since 2004, when lead vocalist-guitarist Peter Howarth replaced the late/great Carl Wayne. Wayne had replaced Allan Clarke, a founding member, in 2000. Guitarist-vocalist Steve Lauri also joined around 2004, and while bassist-vocalist Ray Stiles and keyboards player Alan Parker may not be original members, they have been on board for several years. The Hollies still tour constantly in Europe, and all of those performances have made them a tightly knit, entertaining band.

Live Hits!, recorded during last year’s UK tour, was mixed and produced with no additional overdubs by Grammy Award winning producer, Paul Hicks, Tony’s son. It captures the exuberance of a Hollies concert, especially on songs like “I Can’t Let Go,” “Just One Look,” and “Stay.” There are also faithful, highly polished versions of “Bus Stop,” “Jennifer Eccles,” “He Aint Heavy, He's My Brother,” and a guitar-fortified “On A Carousel.”

Judging from this 2-CD set, The Hollies have an adventurous set list for their live shows, ranging from early songs like the gospel-influenced “Very Last Day” and Beatlesque “Yes I Will,” to the autobiographical title track from their 2010 CD, Then, Now, Always. There’s a heartfelt rendition of Bruce Springsteen’s “Sandy,” which The Hollies first covered on Another Night back in 1975, and the band touches on its most psychedelic era with Graham Nash’s ambitious “King Midas In Reverse.” A few choices are questionable; “The Day Curly Billy Shot Down Crazy Sam McGee” has always seemed like a poor imitation of “Long Cool Woman In A Black Dress” and any number of tracks would have been better than the silly folk standard “Stewball.”

Adding to the variety of material is The Hollies’willingness to reinvent some of their classic hits. Howarth’s acoustic rendition of “I Can’t Tell The Bottom From The Top” underscores the song’s soaring melody, and “Stop Stop Stop” is given a rousing instrumental intro. The original British Invasion gem “Look Through Any Window” gets a slower, harmony-filled arrangement ala Crosby, Stills and Nash, and Howarth engages the audience on a rowdy “Long Cool Woman In A Black Dress.”

Live Hits! gives us non-Europeans a good idea of what The Hollies are up to these days, but it’s high time some promoter found a way for them to tour in America again.
Posted by Terry Flamm at 10:27 PM