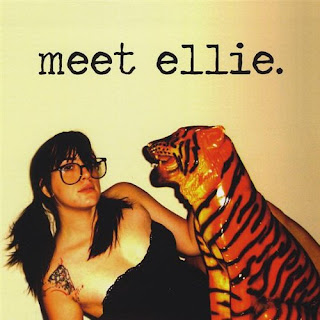 Note: This review originally appeared in the March, 2009 edition of the Illinois Entertainer. That was the issue that featured the crowning achievement of my journalistic endeavors: An interview with Graham Nash. I also had an extended piece on The Bee Gees’ Odessa album, and Around Hear reviews of Hired Goons, a band that combines The Ramones with The Simpsons; and the hard-hitting trio, Bruiser.

The March 2009 cover story was a profile of Fleetwood Mac, written by Janine Schaults, who would later go on to become IE’s editor .

I had  mixed emotions about the Meet Ellie CD, but a year later, I would express more positive things about Ellie Maybe’s punk/pop band, The Maybenauts, and their high-speed and infectious Big Bang EP.

As introductions go, Meet Ellie is more of an extended middle finger than a handshake. The Ellie Maybe Experence (yes, it’s intentionally misspelled) revels in matching R-rated insults to a variety of arrangements. That singer-songwriter Ellie Maybe delivers even her raunchiest material in a sweet, folk-singer style voice is initially ironic, but the novelty doesn’t always pay off.