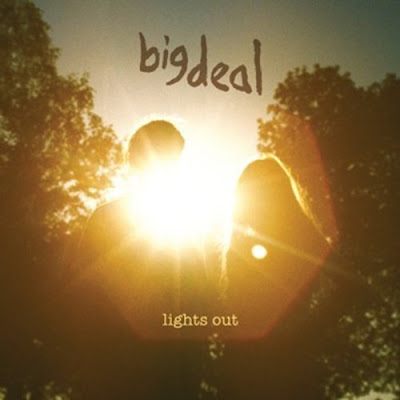 The unlikely pairing of Londoner Alice Costelloe and California native Kacey Underwood results in a highly melodic collection of songs on Big Deal’s full length debut, Lights Out. Pretty much using only acoustic and electric guitars to back their intertwined vocals, the coed duo crafts emotionally complex love songs that bridge the gap between delicate indie music and abrasive shoegazer rock. Lights Out picks up “Chair” and “Locked Up” from 2011’s promising self-titled EP, which had also featured the exclusive “Mai Joy” and a cover of Big Star’s “13.”

“Chair” captures the doubts and elation of entering a relationship while another energetic song, “Distant Neighborhood,” depicts two lovers bitterly drifting apart. The shimmering and possibly more positive “Locked Up,” offers the intriguing lines, “I’m a mess/I’m a wreck/But you wouldn’t know ’cause I’m at my best when with you.” The slower songs start to sound too much alike over the course of Lights Out, which may be why Big Deal eventually adds dreamy keyboards to the mix. Costelloe and Underwood might have to experiment even further to keep their engaging collaboration fresh on future efforts.