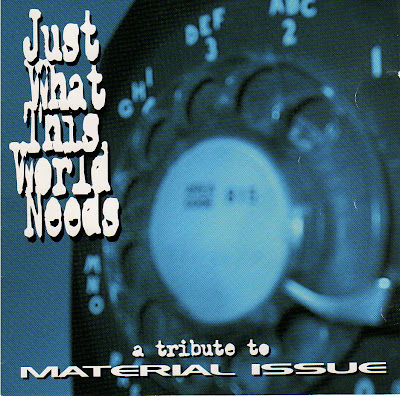 Note: This review originally appeared in the June 2000 issue of the Illinois Entertainer. The CD title was printed as Just What The World Needs, and that's the title this CD is listed under on Amazon. Still, the CD jacket clearly shows Just What This World Needs. I'm not sure if the CD title was changed at some point, but anyway, here's the review.

Just What This World Needs offers the perspectives of 13 local bands on the power pop trio that brought Chicago national attention in the late 1980s and early ‘90s. Dragon Girls are the most adventurous; kicking off “Funny Feeling” with a cappella vocals before slipping into a breezy swing arrangement. Ness offers a twist on “She’s Goin’ Thru My Head” by slowing down the tempo and emphasizing drums and piano. Marvel Kind’s lead vocalist sounds a lot like Material Issue's vocalist, the late Jim Ellison, on a glam rock rendition of “Trouble.”

The other tracks on Just What This World Needs are for the most part faithful to the original versions, and they all underscore Ellison’s superb songwriting ability.