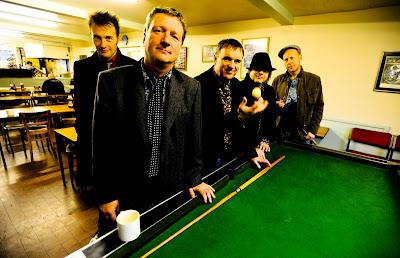 Case & Collins Tour Loses Nerve. If you were planning on hearing some songs by The Nerves at the Empty Bottle this Sunday night, don’t look for Paul Collins to be there. Peter Case & Paul Collins, who formed the power pop trio back in the 1970s (guitarist Jack Lee was the third member), were in the midst of a 2012 reunion tour when something went wrong. A recent press release from Case, who was also a founding member of The Plimsouls, states Collins’s abrupt departure was due to “the usual musical differences.” Collins is no stranger to Chicago, so hopefully he’ll be back soon, performing songs from his days with The Nerves, The Beat, and his 2010 solo CD, King Of Power Pop.

A few days later, The Second Disc heralded a collection of 10 rare George Harrison demos titled Early Takes Volume 1. Its May 1st release on Hip-o Records coincides with the American debut of Martin Scorsese’s Harrison documentary Living In The Material World on Blu-Ray and DVD.

Now Don’t That Make You Feel A Whole Lot Better? Tickets went on sale today for The Summer Dance Party, a double bill of Squeeze and The B-52’s on July 6th at Charter One Pavilion at Northerly Island. Assuming the weather cooperates, this could be one of the more fun events of the season. The B-52’s were impressive running through their festive repertoire last year at Ravinia, with an extended performance of “Planet Claire” that alone was worth the price of admission.

The current line-up of Squeeze includes songwriting partners/founding members, Glenn Tilbrook and Chris Difford. In 2010, the band re-recorded some of its best material, such as “Tempted,” “Hourglass,” and “Cool For Cats” for a new CD titled Spot The Difference. It would be great to hear those songs live, with Lake Michigan and the Chicago skyline as a backdrop. In other Squeeze-related news, the band is set to release a limited edition, white vinyl, 2 LP set called Squeeze: Live At The Fillmore. For $25, fans will also get a Live At The Fillmore download card, a Spot The Difference poster and a Squeeze sticker.

Caffeine Withdrawal. For the past few years, Jeff Kelley has been creating the weekly Internet comedy show, Sunday Morning Coffee With Jeff. Initially, his M.O. was establishing a theme based on public domain footage he found on YouTube, along with his own monologues and animation. As time went on, he recruited contributors like his wife Dawn, and son Mark; my wife Pam and me; and rock and roll road warrior Willy Deal. Kelley phased out the found footage, replacing it with original bits like What’s My Crime? and It’s Not Fred, and running gags like being transported to a spaceship, or being visited by his future self. He also incorporated free downloads from indie rock bands.

But he still wasn’t satisfied, so after this week’s installment, Sunday Morning Coffee With Jeff will cease to exist. Kelley will be taking some time off to contemplate a new Internet show with a different name and format. I look forward to meeting with him and Willy Deal for a few idea-generating sessions.

Blood & Roses In Beverly. Usually, when The Smithereens come to Chicago, it’s at a north side location like the Park West club or a neighborhood festival. But next month, they’ll be on the opposite end of town, for an April 27th concert at the Beverly Arts Center. Hopefully, they won’t be shy about playing songs from their latest CD, the impressive Smithereens 2011. Tickets are $39, $35 for Beverly Arts Center members. The Smithereens were recently inducted into the Star-Ledger New Jersey Rock & Pop Hall Of Fame.

Blood & Guts At The Portage Theater. Chicago-based independent filmmaker Stuart R. Wahlin will present the premiere of his new horror film, Hand Of Glory at the Portage Theater in Chicago this Sunday (March 25th) at 4:15 PM. It’s part of the Indie Horror Film Festival that started today and runs through 10:00 PM Sunday night.

The Fool On The Film. Regulars at the Abbie Hoffman Died For Our Sins festival at the Mary-Arrchie Theatre back in the 1990s will surely remember Drew Richardson, the comic performer who bills himself as a Dramatic Fool. Richardson lives in Pittsburgh these days, and is looking for volunteers from around the world to take part in a project he’s doing for the Quest Visual Theatre in Maryland. Pictographic Play Project is going to be part of QuestFest 2012 and involves people filming their interpretation of a symbol-based script Richardson created. It looks like fun but I can’t even begin to explain it. Anyone interested can get the details at a blog he’s created.

The Whole World’s Acting. World Theatre Day is coming to the Chicago Cultural Center, located downtown, on Tuesday, March 27th. Sponsored by The League Of Chicago Theatres, this free event will include panel discussions, presentations, and special guests. The event starts at 4:00 PM.

Walk Like You’re In England. The Bangles are scheduled to perform at this year’s Rewind The 80s Festival in Henley-On-Thames England on Saturday, August 18th. Some of the other acts lined up for the weekend bash include Kool & The Gang, Lightning Seeds, OMD, Wang Chung, Midge Ure of Ultravox, Grandmaster Flash, Marc Almond of Soft Cell, Roland Gift of Fine Young Cannibals, and Jimmy Somervill of Bronski Beat. There will also be a Scottish version of Rewind The 80s Festival in Scone Palace, Perth, on the weekend of July 20th-22nd, featuring many of the same acts, though not The Bangles.

Just a quick note to the Rewind The 80s Festival organizers: Pay for my airfare and hotel accommodations, along with free admission, and I’ll be happy to cover your little shindig on Broken Hearted Toy.