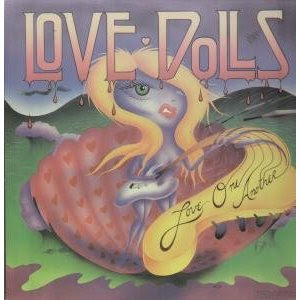 Just a quick note before traveling back to 1989 for a record review.

The Laureates, a Chicago group that spins inventive, British Invasion influenced pop, is releasing its second full-length CD, Spells today, and it’s available for a free digital download at candydinner.com

My review of this highly enjoyable CD will hopefully be in the July issue of the Illinois Entertainer.

Now, on to Love Dolls, who released their debut, Love One Another on the indie Buy Our Records label in 1989. A Google search on the words ‘Love Dolls’ turns up the predictable listings of life-size female replicas for lonely men. But Wikipedia reveals that one of the band members was bassist Abby Travis, who has gone on to a successful solo career and has toured with Beck, Elastica, The Meat Puppets, and The Bangles. Travis recorded a single called “Lies” with Susanna Hoffs, Vicki Peterson, and Debbi Peterson backing her. She doesn’t mention Love Dolls on her website but according to a review I did for the Illinois Entertainer, Love One Another was a freewheeling, fun effort.

With a name like Love Dolls, it’s natural to suspect this four-woman band from California wants little more than to create seductive videos for MTV. But a quick glance at the album jacket for Love One Another and song titles like, “Squashed Octopus,” “The Last Beer,” and “Horrible Aching Loss/Horrible Aching Loss (Slight Return)” suggests this group is more warped than wanton.

Love Dolls combine a revved up version of the 1960s girl group sound and offbeat lyrics about troubled relationships on catchy songs like “Pearls At Swine” and “More Pain, Misery & Suffering (Part 2).” On “Aint No Sin” and “The Thing,” the band thrashes away with a garage rock fury. “Song Remains Insane” in particular, is a musical roller coaster ride that comes to a thrilling finish. “Toadstools” has nonsense lyrics set to a dreamy psychedelic arrangement and “La la la” vocals.

Considering the sardonic nature of the tracks elsewhere on Love One Another, it seems likely that the dismantling of The Youngbloods’ hippie anthem “Get Together” is deliberate.