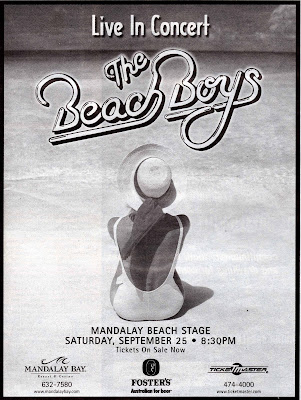 When my wife Pam and I spent four days in Las Vegas back in 1999, I was determined to pick up some local free papers called Las Vegas City Life and Las Vegas Weekly. If I remember correctly, I learned of their existence via an ad on a Las Vegas radio station. Finding them proved to be quite a challenge, but I finally got a copy of each at a record store in The Forum Shops mall at Caesar’s Palace.

Most of the papers’ ads centered on entertainment, like The Freemont Street Experience 60’s Flashback two-day festival, which featured The Guess Who and Lovin’ Spoonful. The House Of Blues at Mandalay Bay had a busy Fall coming up, with concerts by Jeff Beck, Squeeze, Robert Palmer, Morrissey, Jethro Tull, and Echo & The Bunnymen. Over at the Hard Rock Cafe, No Doubt, They Might Be Giants, Sting, Weird Al Yankovic, and ABC had upcoming gigs. The Beach Boys were scheduled for a concert at the Mandalay Beach Stage.

Las Vegas City Life and Borders Books & Music combined to give readers an opportunity to catch a sneak preview of a new flick called American Beauty. Other movies out at the time included the Dennis Rodman blockbuster Simon Sez, Kevin Costner’s For Love Of The Game, and Three Kings, with George Clooney, Mark Wahlberg, and Ice Cube. The top-selling fiction book was Harry Potter and the Prisoner of Azkaban.

Of course, both papers had a lot of ads of casino revues, such as The Rat Pack Is Back! with David Cassidy at The Desert Inn Resort. On the sexier side, there was Latin LaBeatOh (a pun on labido?) Nights at Club Rio, The Pleasure Dome at The Ra Night Club at Luxor, and the Striptease Live Nude Cabaret. More sophisticated people could watch Hamlet at the Thirteenth Annual Nevada Shakespeare In The Park if they didn’t mind seeing Ophelia in a g-string. Just kidding about the g-string.

This was September of 1999, so Las Vegas City Life carried an item about rumors of how Y2K might affect city’s computer system.