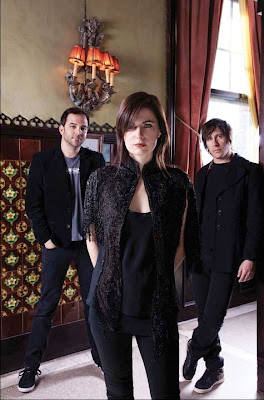 For The Love Of Ivy Ivy, the cosmopolitan techno trio comprised of Adam Schlesinger, Andy Chase, and French-born vocalist Dominique Durand, will release All Hours, its first new CD in six years, on September 20th. A new single, “Distant Lights,” can already be heard on the band’s Facebook page. No tour dates have been announced yet.

Still, it looks like some busy months ahead for Adam Schlesinger, who’ll be touring with his other band Fountains Of Wayne in support of its new Sky Full Of Holes CD, which is coming out on August 2nd. Fountains of Wayne will headline a MOBfest concert at The Hard Rock Hotel on June 23rd.

Panther Pop. Chicago coed band Panther Style describes itself as sounding like the offspring of Lush and Van Halen, and songs like “Seeing Just Not Believing” and “The Instrumental” back up that claim. Panther Style will be having a release party for its new ¡Emergencia! CD tomorrow night, June 11th at The Beat Kitchen. Veteran power pop outfit The Bon Mots and Wells-Next-The-Sea, a folk-rock band that takes its name from an English seacoast town, are also on the bill. The show starts at 10:00 PM.

Back To Bonaroo. WXRT air personality Mary Lennartz will checking in with the FM station throughout this weekend with reports from the Bonnaroo festival in Tennessee. Some of the acts scheduled to perform include The Strokes, Robert Plant, The Decemberists, Florence + The Machine, Smith Westerns, Grace Potter & The Nocturnals, and the recently reunited Buffalo Springfield.

Stop, Hey, What’s That Sound? An exclusive online report from Rolling Stone magazine today states that the reformed Buffalo Springfield will play 30 dates on a tour due to kick off in the Fall. So far, Chicago hasn’t been confirmed as one of the reunion tour’s destinations, but based on comments by vocalist-guitarist Richie Furay, a Windy City stop seems likely.

Chairman Of The Toybox. Toynk, the online store that offers loads of fun pop culture memorabilia, now has an Iggy Pop action figure available for $17.99. The 6 3/4” replica from the Neca company has its own microphone, but if you want him to roll around in broken glass, you’ll have to provide that yourself. Now Neca needs to issue a Kate Pierson from The B-52’s action figure so that she can sing “Candy” along with Iggy. Toynk also has a physical store, located at 430 N. York Road in Bensenville.

Imagine There’s More Beatles Memorabilia. The Rock And Roll Hall Of Fame Museum in Cleveland has just completed a facelift that involved new lighting and technology, as well as several new display pieces related to The Beatles. The Beatles Exhibit now includes a suit George Harrison wore during the band’s 1966 tour of The States; coats that John Lennon and Paul McCartney wore in Help!; illustrations by Stu Sutcliffe and Lennon; McCartney’s handwritten arrangement for “Birthday”; and Ringo Starr’s drop-T Beatles logo drum head.