Rock And Rolling Down The Road 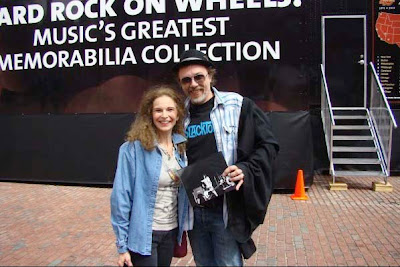 Photo of Jeff Nolan and a woman identified as Wendy taken by Renata Greene, from the Hard Rock Facebook page.

Hard Rock has acquired a lot of memorabilia over the years, including instruments, clothing, and correspondence associated with famous musicians. The chain distributes these artifacts to its various Cafes, so normally you’d have to be a world traveler to see the very best of its collection. But now, the company has put together a Hard Rock On Wheels - 40th Anniversary Memorabilia Tour, which is sort of a mobile greatest hits traveling across America.

The tall, shaggy-haired employee who greeted visitors at the entrance of the long black semi-trailer parked outside Hard Rock Cafe’s Chicago location today certainly qualified as a rock and roll dude. He seemed genuinely psyched as he directed our attention to a video that presented a brief but eye-catching history of Hard Rock, and he recommended grabbing a South Of The Border burger at the Cafe after the tour.

One of the people who appears in the video is Jeff Nolan, who serves as Hard Rock’s Music & Memorabilia Historian. When visitors enter the display area of the truck, he’s ready to greet them and answer any questions they might have about the items. The impressive selection includes the guitar Eric Clapton donated to the very first Hard Rock Cafe, located in London. You’ll also find Jimi Hendrix’s Flying V guitar; Brian Jones’s Vox teardrop; and one of Pete Townshend’s guitars.

There’s also some iconic clothing, like the jacket John Lennon wore on the cover of Rubber Soul; Michael Jackson’s “Beat It” jacket; and stage outfits worn by Steven Tyler, Freddie Mercury, Madonna, Neil Young, Janis Joplin, and Peter Frampton. All of these things are safely encased to protect them from theft or damage. The same goes for Lennon’s handwritten lyrics to “Imagine;” a touching and funny letter from George Harrison to a friend in Liverpool; and Justin Bieber’s skateboard.

Nolan acknowledges that The Bieb’s board has drawn some negative remarks, but it’s attracted its share of admirers as well. He was given the option by the Hard Rock brass to ditch the skateboard, but decided to keep it, along with a colorful Katy Perry gown, to give props to rock and roll’s current generation. At the risk of committing blasphemy, I tend to agree with him. Besides, the Hard Rock On Wheels - 40th Anniversary Memorabilia Tour has plenty of vintage relics, more than I’ve mentioned here, to thrill the purists.