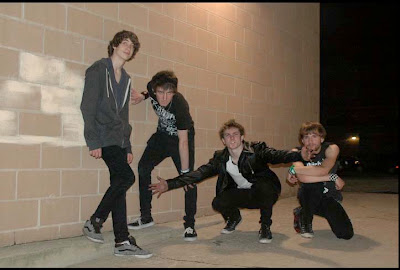 Palatine has been holding its annual Battle Of The Bands for a number of years, but last night was the first time I’ve had a chance to check one of them out. The event is actually three contests in one, with representatives from The Palatine Jaycees choosing a band to perform at its Fourth of July Hometown Fest; The Village of Palatine picking a band to perform at its Downtown Street Fest in August; and The Illinois Park and Recreation Association tapping a band to advance in its statewide competition.

That could result in three separate winners, or one winner picked by all three organizations. At any rate, only The Illinois Park and Recreation Association choice was announced last night; the other two winners will be revealed later. The four bands that took the stage at the Fred P. Hall Amphitheater were picked from a field of about 30 applicants. ADHD, 42, Storm The Front, and On The Fly were all comprised of musicians in their teens, but despite their age, no one seemed particularly nervous. Each of the bands could have been more clear about the names and sources of the songs they played, but that’s a small complaint.

The relatively small crowd that gathered on an unseasonably chilly night was almost an equal mix of parents and the band members’ friends. The two factions didn’t mingle much. In addition to The Palatine Jaycees, The Village of Palatine, and The Illinois Park and Recreation Association, the competition was sponsored by The Drum Pad and The Music Room. For some reason, there was also a local dentist office in the mix, trying to attract new customers by having a guy handing out free toothpaste and brushes from a folding table. There weren’t many takers.

ADHD was the first band to appear, and like the other acts that followed, this trio made creative choices, with music that leaned toward cutting-edge hard rock. The three boys, who looked around 13, included a spirited Green Day cover and an energetic instrumental in its five-song set. “Fun for all ages!” the guitarist quipped at one point.

The numerically named 42 came on next, and opened with a breezy, jazz-flavored original. This co-ed mid-teen outfit with a charismatic female vocalist was the most bohemian of the four contestants, successfully tackling a different musical style with each of its three songs.

It was obvious from the moment the four members of Storm The Front took the stage that they were more polished than their competitors. They were also older, judging by the beard on the lead guitarist. Originals like “The Last Ride” combined high-speed guitars with raw but well-orchestrated vocal interplay, and when Storm The Front covered a vintage punk song, they nailed the intensity.

The four young guys of On The Fly had the awkward task of following this impressive display of power, but they seemed unconcerned. The hard rock/rap band has a first rate guitarist who doesn’t shy away from showcasing his skills, as well as strong original songs like “November, 1943.” Kudos to them for getting the job done instead of worrying about the bands who had gone on earlier in the competition.

Afterward, Storm The Front was picked as the winner by The Illinois Park and Recreation Association; The Palatine Jaycees and The Village of Palatine will announce their choices in the near future. All in all, it was encouraging to see these young musicians taking on challenges, working to meet them, and actively supporting each other throughout the Palatine’s 2011 Battle Of The Bands contest. They all have reason to be proud.