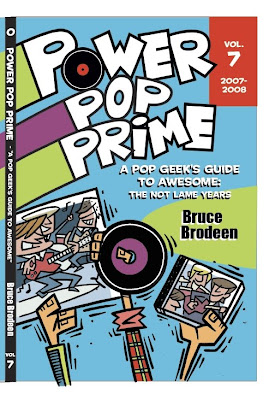 Break Out The Cake And Champagne. Today marks my 500th post on Broken Hearted Toy, dating back to August of 2009. I’d like to thank my wife Pam for setting up this blog and offering so much technical, and occasionally, writing advice. Also, thanks to Steve Forstneger and John Vernon at the Illinois Entertainer for their support. I appreciate all the visitors, especially those who have taken the time to post a comment, or become followers of Broken Hearted Toy.

Thanks to the musicians who have sent CDs to be reviewed, and everyone who has kept me up to date on their various creative endeavors. The Valley Downs, Van Go, Go Time, The Handcuffs, Maple Mars, Ultraviolet Eye, Tomorrow The Moon, The Britannicas, Panther Style, WhiteWolfSonicPrincess, The Telepaths, Mimi Betinis, Linda Good, Todd Wright, Linda Matlow, Hugh Hart, Bud Monaco, Braam, This Is This, Julie Blore-Bizot, Jeff Kelley from Sunday Morning Coffee With Jeff, The Bad Examples, Cliff Johnson, Hollus, Kevin Lee, The Reptoids, Welcome To Ashley, Lannie Flowers, Matt Dodge & The Lobsters, Phil Angotti, Material Re-Issue, Matt Ryd, Severed Limb, Aaron Fox and The Reliables, Magatha Trysty, Red Light Driver, The Greenwoods, Roxy Swain, Dan Pavelich, and The Bradburys. I apologize if I’ve left any one out.

It’s also been a kick to hear from people like Bobby Elliott of The Hollies, Vicky Peterson of The Bangles, David Bash of International Pop Overthrow, Dennis Diken of The Smithereens, and Jon Auer of The Posies via emails, Facebook messages, and tweets, thanking me for writing about them.

Tie Dye One On. Peace Fest Chicago kicks off with a Drum Circle led by Huntress Diana at noon today at 1700 N. Stockton in Lincoln Park, just south of the zoo. The free festival, which will run through 9:00 PM on Sunday, is the work of musician Genral Patton, who will perform with the band His Privates late Saturday afternoon. Many of the 24 musical acts scheduled to appear, especially Sunday’s headliner Paradise Waits, lean toward the Grateful Dead school of rock, but hip hop, funk, reggae, ska, and country will be represented as well. Peace Fest Chicago will also have art on display, as well as vendors selling their goods.

Speaking Of Hippies And Yippies. Mary-Arrchie Theatre has already begun meetings in preparation for its annual three-day, virtually non-stop celebration of drama, comedy, and performance art. Abbie Hoffman Died For Our Sins Festival XXIII will be staged from 7:00 PM Friday, August 19th through very late Sunday, August 21st. Mary-Arrchie will be performing pieces, along with performances by Factory Theater, A Red Orchid Theatre, Rush Pearson, Theatre O The Absurd, Democracy Burlesque, Black Forest, and several others. My old comedy group Famous In The Future will continue its string of appearing at every Abbie Fest since 1989. FIF founder Frank Carr and Mary-Arrchie Theatre Artistic Director Rich Cotovsky (who authentically portrays the controversial Mr. Hoffman) are the only two individuals who have performed at every Abbie.

A Different FIF. Faith In The Fallen, a hard-hitting rock band featuring former Famous In The Future and current New Millennium Theatre member Guy Schingoethe, will be performing as part of five-act lineup tonight at Penny Road Pub in Barrington Hills. Faith In The Fallen goes on at 8:15.

Power Pop That Keeps On Giving. Bruce Brodeen, the former owner of the Not Lame record label, has just released Power Pop Prime No. 7. Subtitled, A Pop Geek’s Guide To Awesome: The Not Lame Years, the book can be purchased for $39.95 from the PopGeekHeaven website. Like every volume in the Power Pop Prime series, No. 7 comes with a limited edition various artists CD compilation. As an additional bonus to those who buy the book, Brodeen promises they’ll start receiving “special surprises via email that will not only enhance the value of your investment but enhance the experience of the content inside [the] book for you.”

Rockin’ The Tiki. The Brill Babies, a local band that covers rock and soul from the 1950s through the 1980s, will be part of a double bill with Hornstars tomorrow night at Cabana Charley’s Tiki Bar & Grill in Woodridge, Illinois. The music starts at 8:30 PM.

In My Life. Linda McCartney: Life in Photographs, a 288 page hardcover collection of photos taken by the famous photographer and wife of Paul McCartney, has just been published by Taschen. In addition to shots of The Beatles, Rolling Stones, and other iconic bands, the book, which was created with considerable input from Paul and other family members, is said to offer a glimpse of her personal life. Fellow Rolling Stone photographer Annie Leibovitz and art historian Martin Harrison contributed copy, and Alison Castle served as editor. On a related note, Chicago Tribune reporter Sandra M. Jones recently did a piece on Taschen opening a store inside the Art Institute Museum Shop in Chicago.