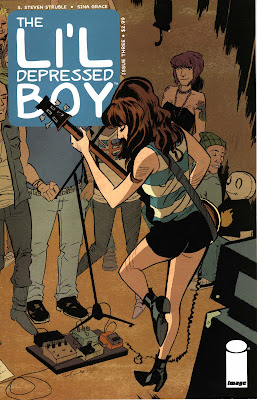 Recently, I was checking out The Like’s Facebook page for clues as to why this talented four woman band suddenly imploded. Amidst the pleas from fans for The Like to return, and assorted junk mail postings, I discovered a video featuring eccentric actress Diana Terranova talking to Sina Grace, one of the guys behind the indie comic Li’l Depressed Boy. As Terranova and Grace discussed in the interview, Li’l Depressed Boy is an odd character with no hair or ears, whose sad emotional state gets a tremendous boost when he’s befriended by a hot-looking, tough-talking hip chick named Jazmin. She affectionately calls him LDB.

The storyline for the recently released Issue Three: You’re No Rock N’ Roll Fun includes The Like performing at Jazmin’s birthday party. I was intrigued, not only because I’m a fan of The Like, but also because li’l depressed boy was what most of my teachers called me in grammar school. Plus, any appearance by a rock band in a comic book is fun.

The clerk at the Graham Crackers comic store in downtown Chicago responded with a quick “Oh yeah” when I asked if he was familiar with a comic called Li’l Depressed Boy, and led me over to what looked like the store’s last copy of Issue Three. Bassist Laena Geronimo appears on the cover, along with LDB and Jazmin. The entire band appears in its animated, mini-skirted splendor on the final three pages of the comic, performing the song “Catch Me If You Can” from its heavily 1960s flavored Release Me CD.

I’m not an avid comics collector, but Li’l Depressed Boy has a fun satiric tone, cool illustrations, and a positive attitude toward women. Even though LDB looks like a rag doll and seems reluctant to try pretty much anything, Jazmin coaxes him out of his shell with a mix of affection and wisecracks. Plus, she makes it clear she won’t take guff from anyone. She closes an anecdote at her party by saying, “At that, I just punched him in the face and walked away.” Li’l Depressed Boy is created by S. Steven Struble (writing, coloring, lettering) Sina Grace (penciling, inking) Zachary Trover (designing) and Nicholas Brandt (editing).

So whatever is going on with The Like, they can at least take solace in the fact that their fans miss them, and the creators of a hip comic liked their music enough to immortalize them on ink and paper. Maybe they could use a motivational visit from Jazmin.