Yes Virginia, There Is A Santa Bash 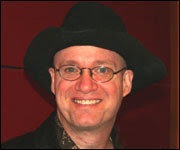 Since September 2nd is David Bash’s birthday, now would be the perfect time to pay tribute to him. As the founder of International Pop Overthrow, David brings the gift of power pop music to boys and girls around the globe. He doesn’t do it all in one night, and wears a cowboy hat instead of a red cap, but for many of us, he works magic.

Named after a song by the Chicago band, Material Issue, International Pop Overthrow made its debut in L.A. back in 1998. The festival has since become a world-wide affair, making stops in numerous cities, including Liverpool, Vancouver, Boston, and San Francisco.

Chicago power pop fans eagerly anticipate David’s annual arrival around the middle of April, with visions of settling into a club like the Abbey Pub where they can catch an eight-band showcase for a mere $10. IPO Chicago usually offers a mix of local bands like The Valley Downs, The Bad Examples, and The Handcuffs; visitors from neighboring cities, like Milwaukee’s The Lackloves; as well as an overseas act like Anison, who are based in England.

A tireless supporter of the power pop genre, Bash enthusiastically introduces all the acts with a brief bio and explanation of why he chose them for the fest. Musicians interested in being part of International Pop Overthrow can contact David via SonicBids. See http://www.internationalpopoverthrow.com for details.

So let’s raise a glass and wish David a Happy Birthday!