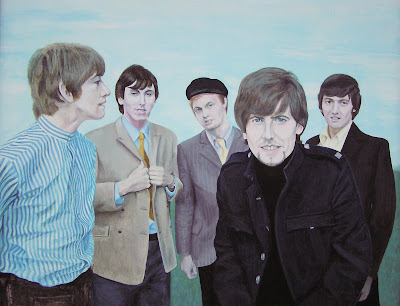 Finally! The Rock And Roll Hall Of Fame has taken the first step toward honoring The Hollies. The British Invasion group was among 12 nominees recently announced for induction in 2010. It’s not a done deal; only five of the dozen acts will actually make the cut, and The Hollies will have to overcome the misconception that they were strictly a Top 40 singles band.

A lot of solid material could be found on The Hollies’ albums throughout their career, including tracks like the exotic “Tell Me To My Face,” the delicately beautiful “Butterfly,” the ambitious mini rock opera “Confessions Of A Mind,” the melodic pop of “To Do With Love,” and the harder-edged “Won’t You Feel Good That Morning.” The band’s three-part harmonies and infectious melodies continue to set the standard for power pop bands to this day. The Hollies were second only to The Beatles in terms of hit songs in the U.K.

The Hollies gave us one third of Crosby, Stills, & Nash, who have already taken their place in The Rock And Roll Hall Of Fame. When I interviewed Graham Nash for the Illinois Entertainer last January, he agreed The Hollies should be there as well. “It infuriates me when I think of the lack of respect for The Hollies,” he said. “They were very influential in the ‘60s and part of the British Invasion. It would be great to induct them.”

If The Hollies are inducted, there may be a logistics problem in terms of getting all the past and current members on stage. Of course, Graham Nash should be there, as well as former lead vocalist Allan Clarke, and Terry Sylvester, who replaced Nash back in 1969. Mikael Rikfors, who filled in for Clarke for a few years in the early 1970s, should also be considered. Some mention should be made of the late Carl Wayne, who replaced Clarke in 2000. Wayne, who got his start with The Move, was a kind-hearted performer who strived to bring The Hollies closer to their fans. (And I have an autographed program to prove it.) But should they reach all the way back to the earliest days for bassist Eric Haydock and drummer Don Rathbone? The Hollies continue to record and tour to this day, although guitarist Tony Hicks and drummer Bobby Elliott are the only original members. Still, some of the current band members have been in The Hollies for a longer period than Nash. Who knows? Let’s just hope that come next year, there’ll be a huge Hollies reunion going on at the Rock And Roll Hall Of Fame.

Yeah! I hope they make it! If "Long Cool Woman" and Bus Stop" aren't enough to get them in, I don't know what is.