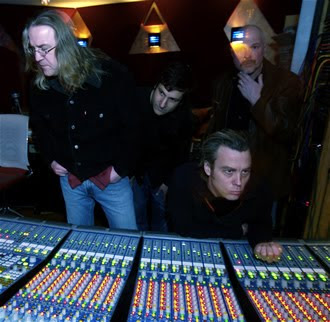 When Bad Examples guitarist Steve Gerlach decided to embark on a side project, he chose a rocket ship as his mode of transportation. He Saw Red, the five song debut from Tomorrow The Moon, offers a futuristic sound forged from Gerlach’s ringing guitar and Jim Dinou’s adventurous synthesizers. Bassist Ryan Nelson and drummer John Carpender add to the fun. The band was impressive in a live performance at this year’s International Pop Overthrow in Chicago.

At times, the music on He Saw Red has a 1980s feel that sounds like an updated, slightly rougher version of The Cars. Gerlach, who mainly sings harmonies behind Ralph Covert in the Bad Examples, proves he can be a strong lead vocalist, whether it’s on the dramatic “French Goodbye” or on the lighter, melodic pop of “Paperweight.” The catchy “Accounts Deceivable” has the feel of classic rock, and the driving beat of the title track twists through rapid tempo changes as Tomorrow The Moon tosses in voice samples and assorted sci fi effects. The epic “Sane?” gets He Saw Red off to a low key start, but its spacey atmosphere sets the stage for the songs that follow.

Tomorrow The Moon will perform an entire set of music by the Psychedelic Furs as part of an intriguing Halloween weekend at the end of October. Several local acts will impersonate famous rock bands at The Abbey Pub on Chicago’s northwest side. Stay tuned for details. Check out Tomorrow The Moon’s MySpace page at www.myspace.com/tomorrowthemoon