I’ve Got My Foot On The Accelerator 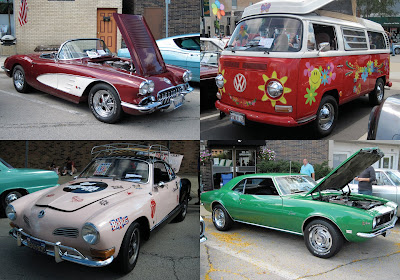 The 2nd Annual Zimmer Classic Cup Car Show, sponsored by Zimmer’s Hardware in honor of its 125 years of being in business, was held recently in Palatine. Since promoting special events is a lost art in this sleepy northwest suburb, residents could be forgiven for not knowing there had been a 1st Annual Zimmer Classic Cup Car Show. Nevertheless, the competition drew a good sized crowd to marvel at antique and muscle cars with their hoods open to display powerful, gleaming engines.

The DJ played 1960s music from The Byrds, The Beatles, The Monkees, The Hollies, Paul Revere & The Raiders, and Jimi Hendrix, but the most appropriate songs came from earlier acts like The Beach Boys and Jan & Dean. That was the era when rock songs were almost as likely to be about cruising in a Stingray, Jaguar, or GTO as finding the perfect romance. The fun and freedom that comes with driving would continue to be celebrated over the decades, via artists like Bruce Springsteen, ZZ Top, Commander Cody, and Tracy Chapman. Even the one-hit new wave band Pearl Harbour & The Explosions got in on the act, joyously singing, “I’ve got my foot on the accelerator” on “Drivin’.”

This year’s Zimmer Classic featured Mustangs, Camaros, Galaxie 500s, and Fairlanes sporting vibrant colors, which caused my wife Pam to lament the unimaginative palette used for today’s mainstream cars. (Our white Neon literally pales by comparison.) I was drawn to a 1968 VW Camper infused with flower power by owners Bill and Jenni Casale, and a 1971 VW Karmann Ghia that owner David Howard said once belonged to actor Ricky Schroeder. “I kind of manned it up a bit,” Howard explained, describing the new two-tone color scheme. He also plans to replace the headlights. But the really cool thing is the way he imaginatively decked out the car with rock and roll decals of Pink Floyd, The Who, and The Beatles, and other bands. And check out that Beach Boys license plate.

I might have voted for the Karmann Ghia as the best car in the Zimmer Classic Cup, but an official explained that only the car owners are eligible to cast a ballot. For me, David Howard has found a great way to commemorate the long-time, loving relationship between cars and rock and roll.