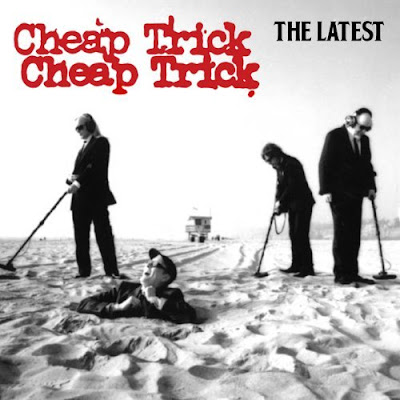 The first time I saw Cheap Trick was at Harlow’s rock club (or was it Haywires or Pip’s at that point?) on Chicago’s southwest side. Rick Nielsen used his guitar to poke out the ceiling tiles above the stage, and Robin Zander so effectively conveyed the raw emotions of “Oh, Candy” I could've sworn he was crying. That was prior to the release of Cheap Trick’s self-titled debut, and decades later, it’s inspiring to see the band releasing solid albums at a fast enough pace to make a long-time fan’s headphones spin. The Latest followed on the heels of Rockford, and preceded Sgt. Pepper Live.

Primarily written by the band, The Latest finds Cheap Trick concentrating on what it does best; creating irresistibly catchy power pop. Several references to The Beatles foreshadow the decision to take on the entire Sgt. Pepper’s Lonely Hearts Club Band for performances in Las Vegas. “Miracle” sounds like it could have been one of the better ballads from John Lennon’s solo days. The enticing “Miss Tomorrow” sets guitar-driven rock amidst symphonic swirls while the lyrics mash The Beatles with The Rolling Stones: “Love, you said that love is all you need./Cold, you taught The Beatles “Let It Bleed.” The high-speed “California Girl” sounds like a gender reversal of The Beatles’ early cover of Larry Williams’s “Bad Boy,” and describes the title character as a Sexy Sadie.

A rousing take on Slade’s “When The Lights Are Out” kicks off with Bun E. Carlos’s signature drumming, and Cheap Trick also roars through “Everyday You Make Me Crazy,” “Sick Man Of Europe,” and “Alive.” Even the romantic ballads “These Days” and “Times Of Our Lives” sport a full-bodied sound, while the lush psychedelia of “ Closer, The Ballad Of Burt And Linda” once again taps into those Beatles influences. Luckily, this was the latest from Cheap Trick, and not the last.