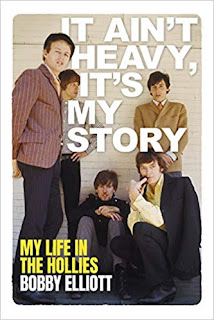 A recent post on The Hollies’ official Facebook page promises information in the next few days about how to pre-order drummer Bobby Elliott’s long-awaited autobiography It Ain’t Heavy, It’s My Story - My Life In The Hollies. Elliott has been with the iconic British Invasion band almost from the very start, and along with founding member guitarist-vocalist Tony Hicks, leads the current version of The Hollies.

Glancing though the comments regarding that Facebook post, I was surprised someone mentioned The Hollies being part of a Flower Power Cruise that sets sail from Miami, FL on March 28. Other 1960s acts who’ll be onboard include The Zombies; Herman’s Hermits starring Peter Noone; Peter Asher; The Turtles; Arlo Guthrie; The Outsiders; The Buckinghams; and The Grassroots. I wish I had known about this earlier; it’s already sold out. Maybe The Hollies can squeeze in a few on-land American gigs after they finish up the Flower Power Cruise. I've been waiting for them to return to the U.S.A. for 16 years.

The Hey Nonny venue in Arlington Heights has been open for a little over year, and has already established a reputation from bringing some of Chicago best local acts to the northwest suburb. Hey Nonny has an ambitious event going on this weekend—a three-day blues festival that incorporating four separate stage areas.

The Imperial Sound will be at Hey Nonny next Friday, February 7; and Tommi Zender with The 45 (featuring Chicago Cubs broadcaster/musician Len Kasper) have a gig there on February 16.

Outronaut and fellow instrumental bands Los Gringos and Tony Richards Trio are performing tomorrow night at Martyrs’ on Lincoln Avenue. The bands will rotate their performances in 15-minutes sets over the course of three hours.

The Social Act will be performing at the Live Wire Lounge on Milwaukee Avenue next Friday, February 7.

Tickets went on sale today for Steely Dan and Steve Winwood on June 26 at The Hollywood Casino Amphitheatre; James Taylor with His All-Star Band and Jackson Browne on June 10 at the United Center; Bishop’s Daredevil Stunt Club, Draft Week, Bambiraptor, and Kachi The Band on February 7 at Lincoln Hall; and Jay O’Rourke and Spies Who Surf on February 14 at Reggie’s Music Joint.

The above listings are from the Early Warnings page in this week’s edition of the Chicago Reader, which features the cover story The Best Chicago Albums of The 2010s. Wilco; Wild Belle; Mavis Staples; Dolly Varden; Dreezy; The Autumn Defense; Twin Peaks; Ric Wilson; Rempis Percussion Quartet; Sin Orden; Beat Drun Juel; Fee Lion; Judson Claiborne; Sonny Falls; and Immortal Bird are among the chosen. I’d be lying if I said I’m familiar with all these acts.

The Go-Go’s have an 11-city tour coming up this summer and can also be seen on film. Alison Ellwood’s documentary The Go-Go’s is currently having its world premiere at the 2020 Sundance Film Festival in Park City, UT. Band member have expressed an appreciation that Ellwood concentrated on the fun and camaraderie The Go-Go’s have shared throughout their career. They were definitely exuding a fun attitude when I first saw them on the Rock Stage at ChicagoFest on Navy Pier back in the early 1980s.

Next Friday, February 7 will bring the new albums Father Of All. . . by Green Day; A Simple Trick To Happiness by Lisa Loeb; and Perdida by Stone Temple Pilots. We’ll get The Slow Rush by Tame Impala on February 14; Surrender Your Poppy Field by Guide By Voices on February 21; and The Main Thing by Real Estate on February 28. This news comes via the February issue of the Illinois Entertainer. You’ll also find Jeff Elbel’s 9-out-of-10 rated review of the Supergrass Super Deluxe Box Set The Strange Ones in this month’s I.E. He sure makes it sound like it’s worth the money, and he also offers hope that the U.K. trio’s upcoming tour might include a Chicago date. Nothing definite on that yet.

The House Theater Of Chicago’s production of Verboten continues its runs at the Chopin Theatre through March 8. Written by Brett Neveu with original songs by Jason Narducy, Verboten is set in 1983 and concerns a teenage punk band aiming to rock out the Cubby Bear venue. Nathan Allen is the director.
Posted by Terry Flamm at 8:49 PM