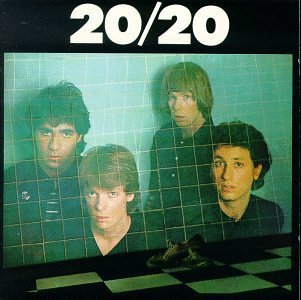 The arrival of this particular year presents a perfect opportunity to blast some tunes from 20/20. Formed in 1977, the Hollywood, CA power pop band was led by vocalist-guitarist Steve Allen and vocalist-bassist Ron Flynt. Anyone unfamiliar with 20/20 should check out its self-titled debut for gems such as “Remember The Lightning” and “Yellow Pills.”

Congratulations to Mary Dixon on bouncing back so quickly after losing her long-time news anchor gig at WXRT. She’s been named as the new Morning Edition host on public radio station WBEZ, and will start work there in February.

Reason number 3,765 why I want to visit England again. Sunny Afternoon, a musical based on the music of The Kinks, kicks off a new round of performances on August 7 at the Manchester Opera House, and will be staged at various UK venues through December 1.

There will be a bit of a reunion when Sunshine Boys open for Juliana Hatfield at SPACE in Evanston on January 16. Drummer Freda Love Smith was a member of Blake Babies with Hatfield long before she joined forces with Dag Juhlin from The Slugs and Jacqueline Schimmel in Sunshine Boys. 2020 looks to be a big year for Sunshine Boys, with their second album on the way, and the perfect timing of one of its tracks, “Infinity Girl.” The single officially comes out January 10, and a week later, we’ll see a video for it created by acclaimed director Jennifer Reeder.

The new season of Doctor Who kicked off this past Wednesday on BBC America with part one of the epic adventure Spyfall. The similarity to the title of the James Bond flick Skyfall was intentional, as evidenced by a social media post featuring Jodi Whittaker spoofing the intro to the Bond films. Whittaker continues to impress as the 13th version of The Doctor, tapping into the iconic character’s winning combination of superior intelligence, humor, courage, and compassion. The second half of Spyfall airs on BBC America this Sunday, and you can also see the entire episode Sunday in select movie theaters, as part of a Fathom event. After the screening at the Paley Center in New York, there will be a live interview with Jodi Whitaker and other cast members. The interview will be broadcast from the Paley Center to other theaters showing the episode.


Matt Smith—who was splendid during his tenure as The Doctor—will reunite with Claire Foy, his for co-star on the Netflix series The Crown, for a run of the Duncan Macmillan play Lungs. When it opens at the Brooklyn Academy of Music on March 25, it will mark the American stage debut for both performers.

The sad news earlier this week that the eccentric and multi-faceted British performer Neil Innes had passed away brought back a fond memory of when I talked to him at Fest For Beatles Fans - Chicago back in 2008. As he was autographing a poster of his movie The Seventh Python, I mentioned that his work inspired me as a member of a local comedy group. At first, he seemed to have no reaction to my comment but as he handed me the poster he said, “Good luck with the comedy. Put a smile on the world’s face.”

Local musicians Ellis Clark and Ary Paloma Jeebie will be hosting their annual George Harrison birthday celebration at Martyrs’ on Saturday, February 22. Clark’s extensive resume includes performing with Epicycle, Social Act, and The Handcuffs, as well as being a solo artist. He also produces records for Chicago area acts. Paloma Jeebie fronts the garage/rockabilly band The Amazing Heebie Jeebies. They’ve already lined up Phil Angotti, Gerald McClendon, vocalist Phoenix, for their 2020 Harrison bash, with other guests sure to follow. Martyrs’ is located at Lincoln Avenue.

Reason number 3,766 why I want to visit England again. The Museum Of London is presenting a free exhibit titled The Clash: London Calling that offers a “go behind the scenes” look at the ground-breaking double album from the English punk band. Items on display include what’s left of the bass guitar Paul Simonon smashed onstage at New York’s The Palladium in 1979 and a notebook Joe Strummer used during the recording sessions. The exhibit runs through April.

Mean Girls, the musical based on Tina Fey’s film of that same name, runs through January 26 at the James M. Nederlander Theatre. The book is by Fey, and the songs were created by lyricist Nell Benjamin and composer (and Fey’s husband) Jeff Richmond.
Posted by Terry Flamm at 10:34 PM