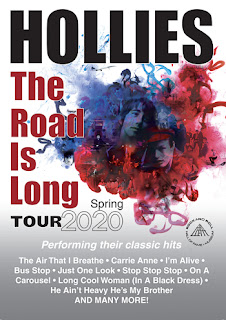 The Hollies Spring 2020 U.K. tour starts on April 16 in Aberdeen, Scotland and wraps up on May 9 at Symphony Hall in Birmingham, England. Original members guitarist-harmony vocalist Tony Hicks and drummer Bobby Elliott are still onboard, and their current mates have been with them quite a while. It seems futile to suggest the band should return to America for the first time since 2001, but I’ll extend an invitation anyway.

Meanwhile, American Hollies fans will be able to buy Elliott’s autobiography It Ain’t Heavy, It’s My Story - My Life And The Hollies when it comes out on April 2. Graham Nash continues to tour extensively in the States, and in more recent years, he’s added a few Hollies tunes to his concerts. Now that former Hollies vocalist Allan Clarke has made an impressive comeback with his latest solo album Resurgence, it would be great to see Nash and Clarke perform as duo, like when they were teenagers.

If you’re still hoping to check out the Andy Warhol exhibition at The Art Institute of Chicago, you’ve got less than two weeks to do it. Andy Warhol - From A To B And Back Again closes on January 26.

Just a reminder: Martyrs’ on Lincoln Avenue has a psychedelic triple bill tomorrow (Wednesday) night with whitewolfsonicprincess, Ovadya, and Baby Noname. Decoy Prayer Meeting will be doing a tribute to The Byrds and Buffalo Springfield at Montrose Saloon this Friday, with special guest Josh Chico. Steve Dawson and Diane Christiansen of the critically acclaimed alt rock/roots band Dolly Varden (and before that Stump The Host) will be at Hey Nonny in Arlington Heights this Friday night.
Posted by Terry Flamm at 9:56 PM