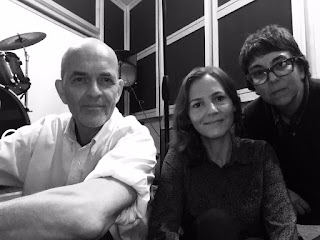 Sunshine Boys haven’t been around very long but each band member has years of experience on the music scene. Lead vocalist-guitarist Dag Juhlin was a founding member of the Chicago-based punk/pop band The Slugs, and his resume also includes Poi Dog Pondering and the eclectic covers band EXPO ’76. Bassist-backup vocalist Jacqueline Schimmel was a member of Big Hello, the Brad Elvis-Chloe F. Orwell band that preceded their current one The Handcuffs. Drummer Freda Love Smith was part of the Boston-based trio The Blake Babies with Juliana Hatfield and John Strohm, as well as the bands Antenna and Mysteries of Life.

That level of expertise no doubt helped accelerate the path from first gig to debut album, and it’s also likely The Sunshine Boys were eager to get their message out to the public. While most of Blue Music deals with personal and romantic entanglements, there are also urgent calls to action regarding America’s current political and social climate. Whatever the approach, well-crafted lyrics are set to indelible arrangements that combine alt rock with classic guitar-driven 1960s pop.

“Questions” is a heartfelt tale of a budding relationship built on the old-fashioned means of a man and woman exchanging letters, and the doubts they have about each other. The achingly beautiful “Caroline Yes” is another gem about a romance being tested, while “Billy Boy” deals with the challenges and expectations a young man encounters upon graduating high school. Schimmel’s backing vocals give a dreamy quality to “Tripping Through Time,” a catchy look at various events in people’s lives.

“There Goes Another One” doesn’t mention any specific issues, but lines like “Why don’t you speak up?/Why can’t you make a choice?” aim to rouse people from their complacency. “Schoolyard Bully” takes its name from an often-used description of Donald Trump, and bristles with observations like, “He lowers the bar/Sets free the monsters we already are.” “Only A Million Miles” is Blue Music’s most inspiring mix of protest and powerful instrumentation, simultaneously sounding defeated and optimistic. We’ve accomplished so much in terms of social justice, the song proclaims, but far do we still have to go? Only a million miles.
Posted by Terry Flamm at 9:42 PM