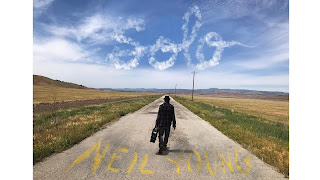 Tickets go on sale tomorrow for Neil Young’s show at the Auditorium Theatre on June 30 and July 1.

Jessica Risker, a Chicago-based indie/folk performer who’s been getting some positive press lately, has a 2:00 p.m. in-store performance at the Reckless Records on Milwaukee Avenue tomorrow, May 19. She’ll be performing songs from her new album I See You Among The Stars.

The Ripleys have a 9:30 p.m. show tomorrow night at FADO just north of downtown at Clark and Grand. FADO is known for its Irish food and decor, but The Ripleys will be more likely to perform tunes by Tom Petty and The Beatles than jigs and reels. And maybe a U2 cover.

The real U2 returns to the Chicago area with its eXPERIENCE + iNNOCENCE Tour next Wednesday, May 23 at the United Center.

Great Moments In Vinyl will perform the entire Dark Side Of The Moon and Wish You Were Here albums at Martyrs’ on Lincoln Avenue next Friday, May 25.

Empower, a new opera that explores the experiences of growing up on the south side of Chicago, will be performed on May 31 at the Lyric Opera Of Chicago. The work features a script adapted by Ike Holter and music by Damien Sneed and is a collaboration with the Chicago Urban League. Tickets are $10–$20.

Graham Nash, Cliff Richard, Todd Rundgren and Lee Ann Womack are among the guest vocalists covering Motown classics on legendary songwriter/producer Lamont Dozier’s new Reimagination album. Nash performs a Supremes medley that includes “Stop In The Name Of Love.” He previously covered that song with The Hollies on their What Goes Around reunion album in 1983.

Streetwise, the nonprofit publication that helps homeless people get back on their feet, is hosting The Cool Party on June 23 at The Chop Shop/1st Ward. There will be live bands and an art show.

The Vinyl Merchant is having a Record Pop-Up event at Patio at Peckish Pig in Evanston on Sunday, May 27. The Pop-Up store will also be at that location on June 10 and June 24.

Soundtrack Serenade members Charlie Short, Holly Senchak Dausch, Mark Winkler, Chris Anderson, and Neal Alger will reunite for an evening of songs from the High Fidelity flick at Quenchers Saloon on June 6. Tim Grimes will serve as MC. The gig is a farewell to the beloved Quenchers bar, which is closing soon.

How To Talk To Girls At Parties, a new movie that introduces outer space aliens to London’s punk scene in 1977, opens next Friday, May 25. It’s based on a story by Neil Gaiman and stars Elle Fanning and Nicole Kidman.

Neil Gaiman fans might also want to check out Lifeline Theatre’s adaptation of his novel Neverwhere when it opens on June 7. It’s been adapted by Robert Kauzlaric and is being directed by Ilesa Duncan.

While making my weekly trip to downtown Chicago today, I was pleasantly surprised to spot my nephew on the cover of Modern Luxury’s Men’s Book Chicago summer edition. The Magazine For The Modern Gentleman (that may sound like sleazy but it’s not) has a cover story titled Chefs On The Rise and proclaims, “Joe Flamm Leads The Next Genaration.” Joe is currently Executive Chef at Spiaggia, and won the most recent season of Top Chef on Bravo. Ken Biffar at Sienna Tavern; Ryan Pfeiffer at Blackbird; Kyleen Aronson at Acadia; Andres Padilla at Rick Bayless’ Restaurant Group; and Sarah Rinkavage at Marisol are also featured in Ariel Cheung and Jaclyn Jermyn’s article, and all the chefs were artfully rendered by photographer Anthony Tahlier.
Posted by Terry Flamm at 10:22 PM