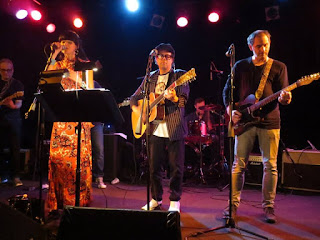 I can still remember watching a fascinating interview humorist/radio personality Martin Lewis conducted with Patti Boyd a number of years ago at The Fest For Beatles Fans – Chicago about her marriage to George Harrison. Boyd was particularly compelling while recalling how frustrated Harrison felt when Paul McCartney and John Lennon would reject one of his songs. That story came to mind while I was at the George Harrison Birthday Tribute Concert at Martyrs’ this past Saturday night. The local musicians who brought his material to life—from hits like “Something” and “Here Comes The Sun” to an obscure instrumental from the Wonderwall soundtrack—provided conclusive evidence that Harrison was a gifted composer and interpreter of other’s material.

The evening started with an exotic pre-show set by The Sandalwood Sitar Ensemble, and included a charity raffle to benefit Famous Fido Pet Rescue. Ellis Clark, whose extensive presence on the Chicago music scene includes his current band The Big Parade, as well as Epicycle, The Social Act, and The Handcuffs, once again served as MC, along with Amazing Heeby Jeebies lead vocalist Ary Paloma Jeebie. Just like their first George bash, staged in 2017, they performed together backed by members of their bands, and also introduced the other acts on the bill.

This year’s version may have been even better than last year’s, and I say that despite having not been able to stay late enough to catch Tomorrow The Moon and The Unswept, two acts I definitely wanted to see. Singer-guitarist Phil Angotti, introduced by Clark as, “The number one Beatles expert in the midwest,” offered faithful renditions of “Old Brown Shoe,” “Apple Scruffs,” and the solo deep track “Run Of The Mill.” He, Clark and Ary Paloma Jeebie, were the nucleus of a house band that supported several acts.

The easy-going atmosphere allowed for some one- or two-song sets, such as when singer Frankie B. spun “Happy Just To Dance With You” into a seductive bossa nova; and singer-acoustic guitarist Scott Williams dug into All Things Must Pass for Bob Dylan’s “If Not For You” and the Dylan/Harrison penned “I’d Have You Anyway.” The single-named singer Phoenix, daughter of Ary Paloma Jeebie, also went the deep album track route by joining Clark, Angotti, and others for a heartfelt “Long, Long, Long” from The White Album. Chicago psych rock veteran Constantine came onboard to lend his charismatic vocals to “If I Needed Someone.”

Throughout the night, the George Harrison Birthday Tribute Concert sprung one pleasant surprise after another. The Handcuffs, led by vocalist-guitarist Chloe F. Orwell and drummer Brad Elvis, enlisted a horn section and vocalist Rachel Drew to help blast through a five-song set that included “Got My Mind Set On You” and “While My Guitar Gently Weeps.” Backed by the house band, rhythm and blues vocalist Gerald McClendan sang a transcendent “My Sweet Lord” that also featured Ary Paloma Jeebie, Phoenix, and Frankie B. on backup vocals. And there was still more. EXPO ’76 keyboards player Kenn Goodman joined in on “Handle Me With Care” and “Dark Horse,” and saxophonist Mars Williams from The Psychedelic Furs augmented “Isn’t It A Pity” and “You.”

At one point, Ary Paloma Jeebie declared she felt George Harrison’s spirit in the room. If he was, he must have been happy to see how much everyone there loved his music.
Posted by Terry Flamm at 9:38 PM