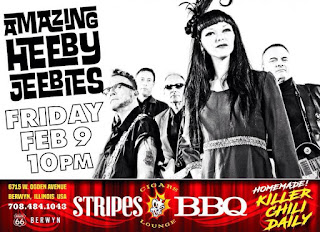 The Amazing Heeby Jeebies will be showcasing tunes from their new album Bad Feeling at their Sleeze Ball Costume Party And Release Party at the Cigars And Stripes venue in Berwyn. According to the band’s Facebook page, there will be a release party on Chicago’s northside in the near future.

The Bishop’s Daredevil Stunt Club, the clever-named Chicago band that plays catchy power pop, will be unveiling some new material tonight at The Elbo Room on Chicago’s north side.

Tickets are now on sale for legendary guitarist Jeff Beck and Paul Rogers of Free and Bad Company fame at the Huntington Pavilion on July 29; indie rock band In Tall Buildings at Schubas on March 24; Leo Kottke at SPACE on May 25 and 26; Graham Parker and James Maddock at City Winery Chicago on May 10; Alice Peacock at SPACE on May 5; Cheap Trick and Poison at Hollywood Casino Amphitheatre on June 9; and Paul Simon at the United Center on June 6. There’s a full-page ad for Paul Simon’s show in today’s Chicago Tribune.

Welcome to everyone in town for the Chicago Auto Show, which kicks off tomorrow and runs through February 19 at McCormick Place. According to Robert Duffer’s preview in today’s Chicago Tribune, some of the more interesting vehicles on hand will be a Nissan Titan AT-M6 that looks like a walker machine from Star Wars, and the high-speed Chevy Corvette ZR1. I still have fond memories of my Dad bringing me and my brothers to the Auto Show when we were kids. We’d would come home with bags filled with STP stickers, cool buttons and other promotional trinkets, and if we were lucky, some sports celebrities’ autographs.

I keep meaning to give a shoutout to the Reckless Records store on Madison in downtown Chicago for its collection of 45 rpm singles. Each week, there are really cool new rarities and vintage singles. Curbside Books And Records, located in the far front corner of Revival Hall on Clark Street, also has some fascinating 45s, along with its selection of indie books, cassettes, and vinyl. I picked up a copy of First Aid Kit’s “Universal Soldier”/“It Hurts Me Too” single on Jack White’s Third Man Records label today.

Chicago-based power pop band Frisbie is celebrating its 30th anniversary with a gig at Martyrs on April 28. The Sunshine Boys, who haven’t celebrated their first anniversary yet but have years of experience in various other bands, are also on the bill that night. In a recent Facebook post, Steve Frisbee promised, “a host of juicy surprises are in the works.”

Freda Love Smith, one of the music biz veterans that comprise The Sunshine Boys, was in Boston on February 3 for the East Coast half of the Hot Stove Cool Music charity events hosted each year by the Foundation To Be Named Later. She was part of an all-star act dubbed Band Of Their Own (BOTO) that fielded nine women rock musicians. Juliana Hatfield also performed that night. The Foundation To Be Named Later was created by Chicago Cubs (former Boston Red Sox) President of Baseball Operations Theo Epstein and his twin brother Paul as a means to improve lives through the healthy development of kids and their families. The Chicago half of Hot Stove Cool Music will be held on June 8 at Metro.

The Go-Go’s reunited for a seven-song set at New York’s Bowery Ballroom in honor of Head Over Heels, a new musical based on their catchy repertoire. The production will run from April 10 through May 6 in San Francisco before moving to Broadway for previews starting June 23. It would be great if it came to Chicago at some point in the future. The Go-Go’s are scheduled to perform at Fox Theater in Oakland on June 28.

The Bangles were part of a Totally ‘80s Live show in Anaheim, CA on January 26 that also featured The Romantics, A Flock Of Seagulls, Tone Loc, Boy George, Adam Ant, Nick Hayward of Haircut 100, Dramarama, Sugarhill Gang, and members of The Furious 5. Radio and TV personality Richard Blade served as host. According to the Best Classic Bands website, it was the first live gig for The Bangles in over a year. It’s hard to think of The Bangles being AWOL for that long since Susanna Hoffs, Debbi Peterson, and Vicki Peterson always seem so busy doing various music projects. Vicki Peterson is in a new band called Action Skulls that comprises John Cowsill from The Cowsills and Billy Mumy from the Lost In Space 1960s sci-fi show.

The 2018 George Harrison Birthday Tribute Concert with host Ellis Clark takes place at Martyrs’ on Lincoln Avenue on Saturday February 24. Vocalist Ary Jeebie from The Amazing Heeby Jeebies will be helping out, and as with last year’s tribute, a number of Chicago’s best bands will be taking part. The lineup features Clark’s band The Big Parade; Phil Angotti; The Handcuffs; Tomorrow The Moon; Constantine; Greg Jackson Combs; Phoenix; Frankie B; The Unswept; Aethereal; Gerald McClendan, and other guests to be announced.

As I mentioned here earlier, my nephew Joe Flamm was told to pack his knives after finishing last in a QuickFire showdown on last week’s installment of Top Chef. He has since won one Last Chance Kitchen challenge, and qualified in another. His latest LCK battle, with the hard-charging Brother Luck, ended in a cliffhanger—the results of which we probably won’t know for another week. The winner returns to compete in the Top Chef finals. Last night in Chicago, Joe made a special appearance at a Chicago Blackhawks game.
Posted by Terry Flamm at 10:33 PM