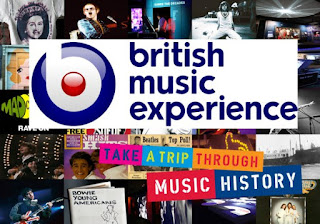 Noted travel expert Rick Steves had an article in today’s Chicago Tribune about the steps Britain and Ireland are taking to increase tourism. I’m a life-long Anglophile and finally had my chance to visit London in 2006 when my wife and I spent three weeks in Europe. (We also visited Scotland, France, and Germany.)

I’m still yearning to visit Liverpool, and Steves mentioned the city’s British Music Experience museum. The webpage mentions, “an exclusive range of gifts, clothing, books and memorabilia from the Merch Store,” but it doesn’t look like you can do any online shopping. I had an extended and interesting chat with a rep from the British Music Experience at last year’s Fest For Beatles Fans - Chicago about the museum, as well as a book he had written.

So, it’s definitely on my wish list, along with checking out International Pop Overthrow - Liverpool. Steves also mentioned the Handel And Hendrix Museum in London’s West End area. Apparently, the two musicians could have been next-door neighbors had they not been separated by a few centuries. One of the exhibits is a faithful recreation of Jimi Hendrix’s bedroom.

Congratulations to Charles Finch on receiving the National Book Critics Circle’s Nona Balakian Citation for Excellence in Reviewing. His reviews often run in the Chicago Tribune and New York Times. Psst, Charles: I’ve got four novels that I’m hoping to get published someday.

Actor David Schwimmer, whose character Ross Geller on the Friends sitcom became the patron saint of unrequited love, is in Chicago to direct a new play at the Lookingglass Theatre. Schwimmer helped found The Lookingglass Theatre in 1988. As noted by Chicago Tribune writer Robert Channick, Schwimmer also recently filmed a 60-second Skittles commercial that will be only screened for an L.A. teen named Marcos Menendez rather than a worldwide Super Bowl audience. It’s a marketing strategy that’s either a stroke of genius or extremely unambitious.

Writer Alex Nitken had an article in the Chicago Sun-Times today about a new Milwaukee Avenue rapid transit bus network that could be up and running between Jefferson Park and Niles by the end of this year. I’d love to see some southbound Milwaukee Avenue buses running later than they currently do on Saturday nights. Last year, I had to leave early from the splendid Kaleidoscope Eye festival at Live Wire Lounge because the last bus to Jefferson Park came a little after 10:00 p.m. By the way, I’m hoping Red Plastic Buddha vocalist-bassist and Kaleidoscope Eye organizer Tim Ferguson has another one planned for 2018.