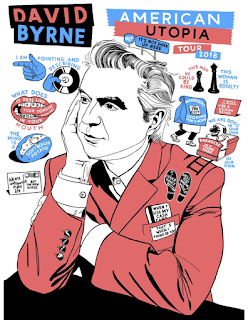 According to an article by Josh Noel in last week’s Chicago Tribune, 55.2 million tourists came to Chicago in 2017. That number not only set a record, it prematurely reached a goal Mayor Rahm Emanuel projected for the year 2020. The increase is surely tied into the Chicago-centric items I post on Broken Hearted Toy. Not really. But here’s a hearty welcome to out-of-town visitors and a call to action for the local arts and entertainment community to make a grand impression.

Tickets are now on sale for David Byrne’s American Utopia Tour visit to the Auditorium Theatre on June 2; The Decemberists at Chicago Theatre on April 10; Michael McDermott at City Winery Chicago on March 23 and 25; and MGMT at the Riviera Theatre on March 3.

I had never heard of the four-woman Spanish band Hinds until noted rock critic Greg Kot did a feature article on them in yesterday’s Chicago Tribune. They’ll be playing their catchy indie rock songs at 11:00 p.m. tomorrow at Lincoln Hall, and their new album I Don’t Run is due out in April.

Go Time! lead vocalist-guitarist Scott Niekelski and singer-guitarist Gerry O’Keefe have a gig tonight from 7:00 p.m. to 10:00 p.m. at the Church Street Brewing Co. in Itasca.

There was a recent post by Joe Marchese on The Second Disc website about a new album called Listen People: The Graham Gouldman Songbook 1964 – 2005. The 24-track compilation includes well-known recordings like “Bus Stop” by The Hollies; “Evil Hearted You” by The Yardbirds; and “The Things We Do For Love” by 10cc, but from there, things get pretty adventurous. Herman’s Hermits perform “The London Look” from Yardley Cosmetics commercial, Gary Lewis And The Playboys cover “Look Through Any Window,” Rush does “Heart Full Of Soul,” The Outsiders play “Listen People,” and Morrissey offers his take on “East West.” You’ll also find Gouldman himself doing “No Milk Today.” Other artists on Listen People include Jeff Beck, The Mindbenders, Cher, and Kirsty MacColl.

The rock and roll community has suffered another heartbreaking loss with the recent death of bassist Jim Rodford. He most recently toured as a member of The Zombies and is credited with playing a major role in their early success. He was also a founding member of Argent with Zombies member Rod Argent.

The Count Basie Theatre in New Jersey was the setting for a recent all-star event titled Time And Time Again; A Celebration Of the Music Of Pat DiNizio. Several guest musicians joined remaining Smithereens members Dennis Diken, Jim Babjak and original bassist Mike Mesaros on some of the band’s best material. Musician/actor/radio host Steven Van Zandt, whose Underground Garage syndicated radio program helped sponsor the event, joined in on “Sorry,” and Robin Wilson from The Gin Blossoms led the way on “Behind The Wall Of Sleep,” “Blood And Roses,” and “Green Thoughts.”

Other guest/Smithereens collaborations included Freedy Johnston on “Cigarette.” Ted Leo on “Especially For You,” and Richard Barone from The Bongos on “Cut Flowers.” Noted producer Ed Stasium joined in the tribute, along with The Grip Weeds, Dave Davies from The Kinks, Lenny Kaye and Tony Shanahan, Marshall Crenshaw and frequent Smithereens bassist-backup vocalist Severo Jornacion. Patti Smyth and Scandal performed “Paint it Black.” White Castle donated $10,000 to the Pat DiNizio Musical Scholarship at the Basie Performing Arts Academy as well as a massive supply of cheeseburgers to be distributed during The Smithereens’ cult classic “White Castle Blues.”

Big Brother’s Vinyl performed an impressive set of classic rock covers last Saturday night at the Arlington Ale House in Arlington Heights. A lot of the songs featured extended, twin guitarist fueled arrangements, and the selection—from Dire Straits to The Allman Brothers—was as adventurous as it was well chosen. Lizzy Petitt and The Bandwagon kicked off the evening with a mix of current hits and rock standards that found the former Serendipity singer-keyboards player coming into her own as frontperson.

On this week’s episode of Top Chef on the Bravo Channel, my nephew Joe became the first member of our family to win a gold medal. Not an actual gold medal, but a facsimile as part of an Olympics-themed elimination round. My nephew, AKA ‘No Mustache Joe,’ joined forces with ‘Mustache Joe” Sasto and Bruce Kalman on the Blue Team, and each of them won their leg of the competition. Just a note of admiration for all of this season’s contestants. They’ve worked hard under extreme conditions and impossible deadlines, and made us all interested in their personal stories.
Posted by Terry Flamm at 4:34 PM